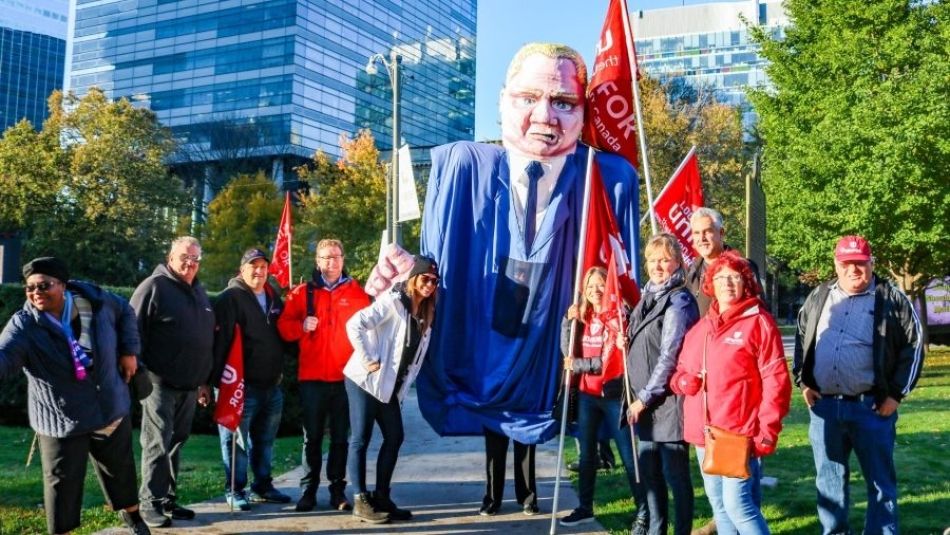 Bill 124 squashed the wages and bargaining rights of public sector workers for two years in Ontario.

And now, after two years of prep, Bill 124 hearings began on Monday September 12, 2022. The hearings will run Monday-Friday from September 12-23.

“Workers have fought back against this wage suppression through direct action, lobbying, sharing personal experiences, and now finally, with our day in court,” said Naureen Rizvi, Ontario Regional Director. “Bill 124 is a violation of the Charter, and Premier Ford should have repealed the law, and apologized to workers many years ago.”

Premier Ford’s wage restraint law, Bill 124, forced a 1% total compensation cap across the public sector in Ontario, including unionized and non-unionized workers. Many of the workers covered by this regressive legislation were at great personal risk and still carried us through the worst of the pandemic.

Keep the conversation going around Bill 124 outside of the courtroom. Share your thoughts with the Premier on Twitter this week, and ask your members to do the same. Copy and share this message on social media.

The cost of living is rising, but public sector workers can’t get ahead. Doug Ford capped public sector wages at 1% increases. @Fordnation you must repeal Bill 124 and stop attacking workers. #Unifor #Bill124

“The government of Ontario can repeal the law at any time so that workers facing low wages and rising costs can push to raise their wages once again,” continued Rizvi “Until then, your union will keep fighting this law every way  that we can, including at the hearings over the next two weeks.”

Background on the Charter Challenge

Unifor’s Notice of Application was filed on August 28, 2020 with the Ontario Superior Court of Justice.

Unifor joins 40+ other unions and associations (including the OFL Coalition, OSSTF, ETFO, OECTA, ONA, OPSEU, the Society and PWU) in arguing that Bill 124 breaches the right to free collective bargaining under the freedom of association guarantee in s. 2(d) and the right to strike under the freedom of expression guarantee in s. 2(b) of the Canadian Charter of Rights and Freedoms.

Unifor represents approximately 18,155 employees working in health care, education and social services sectors across Ontario who are affected by Bill 124.