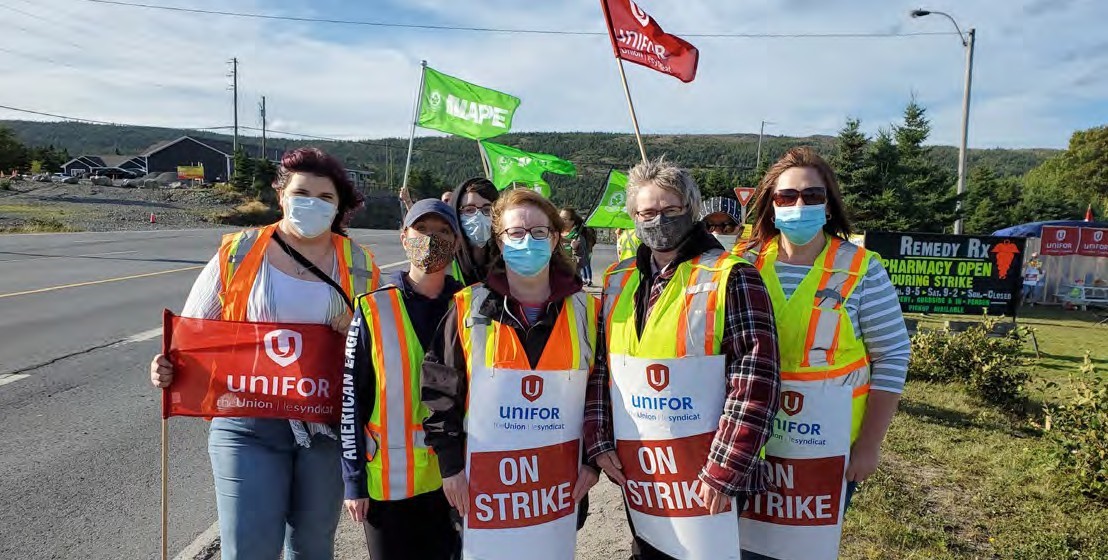 While 98 % of all contract negotiations are settled without a strike, Unifor’s Strike and Defence Department is here to provide resources, support and guidance for Unifor bargaining committees who are forced to take strike action or walk a picket line during a lockout when a mutually acceptable agreement cannot be reached at the bargaining table. At Unifor, 10% of dues goes towards our strike fund to support and provide strike benefits of $300 a week to Unifor members.

What is a Strike?

A strike is a collective action taken by all workers in a bargaining unit to put pressure on the employer to take their concerns seriously by withdrawing all or some of their labour.

What is a Lockout?

A lockout is when an employer refuses to allow employees in the bargaining unit to work. Legally, the employer can only lock employees out after conciliation has taken place and a specified period of time (as identified by the provincial or federal legislation) has passed since a No Board Report has been issued by the Minister of Labour.

What is a “No Board Report”

This is a report issued by the Minister of Labour on the recommendation of the conciliator at the request of employer and/or the Union. The term ’no board‘ comes from the fact that in this report, the Minister states that they do not consider it advisable to appoint a ‘conciliation board’ to further attempt to help the parties reach an agreement.

Either the employer and/or the Union can request a no board report to be issued, and after a specified period of time the parties are legally allowed to strike or lockout.

Conciliation is when an official is appointed by the provincial or federal Minister of Labour to assist the parties in reaching a tentative agreement. The conciliator cannot require the parties to agree on anything, has no decision-making power and is not a compellable witness in any legal proceeding. Either party may ask the Minister to appoint a conciliator. The parties are not legally allowed to strike or lockout until after they have met with a conciliator and a No Board Report has been issued by the Minister.

Mediation is when a neutral third party, often the same person that acted as the conciliator, is appointed from the Ministry of Labour to assist the parties to resolve a dispute by suggesting

possible areas of compromise, bringing a different point of view, clarifying issues and using many other techniques designed to bring the parties closer together and narrow the disagreement.

The function of mediation is to assist the parties by being creative and innovative in finding areas of agreement and compromise to reach final resolution of an impasse. This is the stage in the bargaining process immediately preceding a strike/ lockout deadline set out by the No-Board Report.

What is a Scab?

A scab is a replacement worker hired to cross a picket line and do the work of members in the bargaining unit. Unifor is actively calling on all elected officials at the provincial and federal level to enact anti-scab legislation, which already exists in Quebec and B.C. Learn more on our website.

* Note some emergency essential workers in Canada are currently forbidden by law from going on strike. If this is the case in your situation, and your bargaining committee and the employer can’t reach a deal, a neutral arbitrator will determine the final contract in a legal process called interest arbitration.