Unifor is calling for anti-scab legislation in every jurisdiction in Canada. Read the research paper and sign the petition.

Unifor is calling on all elected officials at the provincial, territorial and federal level to enact anti-scab legislation, in accordance with a set of basic principles based, in part, in existing legislation in Quebec, BC, and international jurisdictions.

Sign here to send a letter to your federal representatives:

File
Fairness on the line: The case for anti-scab legislation in Canada

“In the group struggle over the division of the joint-product, labor utilizes the union with its two great weapons,—the strike and boycott; while capital utilizes the trust and the association, the weapons of which are the blacklist, the lockout, and the scab. The scab is by far the most formidable weapon of the three. He is the man who breaks strikes and causes all the trouble.”
From “The Scab” by Jack London

The scab might be the single most polarizing figure in the world of labour relations. For employers, the scab represents an effective means of applying economic pressure when contract talks with the union break down, either taking some of the financial sting out of a lockout, or undermining the effectiveness of a strike. For picketing union workers, the scab represents a breach in the strength of the line, and a loss of solidarity and collective power. At the same time, the use of scabs completely destroys the essence of a labour dispute, that is, a withdrawal of labour creating a cost to both the union and the employer.

Whether at the provincial or federal level, labour relations legislation in Canada is based on a set of fundamental principles arising from our freedom of association and the shared goal of harmonious employer-labour relations. The Preamble to the Canada Labour Code begins with

The Code goes on to note that Parliament supports a system where employers and workers, “develop good relations and constructive collective bargaining practices,” and claims that, “the development of good industrial relations to be in the best interests of Canada in ensuring a just share of the fruits of progress to all.” Provincial labour legislation contains similar language. And yet, the use of scabs would seem to contradict these very clear and fundamental statements of principle. As this paper will show, the use of scabs during labour disputes undermines the “common well-being” and decreases the likelihood of “good relations and constructive collective bargaining practices.”

In this paper, we will argue that strong and fair anti-scab legislation – at both the federal and provincial level – will help lead to shorter labour disputes, safer workplaces, and less acrimonious and conflict-ridden picket lines.

Scott Doherty speaks to locked out Local 594 members during one of many daily rallies streamed live on Facebook from the Co-op Refinery in January of 2020.

This paper begins with an analysis of Unifor’s experience with the use of scabs during strikes and lockouts since the union’s founding in 2013. Surprisingly there is a lack of solid data in Canada regarding the effects of scabs on the frequency and duration of labour disputes. In the section titled Scabs and Unifor Strikes and Lockouts, we will explore our own experience with scabs, by the numbers, showing a strong correlation between the use of scabs and drawn out labour disputes.

Presentation of a donation to the striking members of Local 1209 at Delastek at a solidarity demonstration in the streets of Grand-Mère, Quebec, on December 15, 2015.

We also know that beyond the numbers themselves, there are real working people out on the picket line, taking huge risks and fighting for themselves and their families. In Voices from the Picket Line, we are going to look at two real life case studies that document the experiences of Unifor members and how the use of scabs during labour disputes undermined workplace safety, increased the likelihood of conflict, dragged out disputes, and created lasting animosity that destabilizes labour relations.

Acknowledging these and other negative effects, governments have often limited and or restricted the ability of employers to use scabs during labour disputes. In the section titled Anti-scab Legislation in Canada, we will explore the relevant legislative regimes established by federal and provincial governments in this country. Then, we will take a bigger picture look, and explore the global situation in Anti-scab Legislation Around the World. We believe we can build on the experiences of other jurisdictions to guide the development of a made-in-Canada solution to the problem of scabs.

The last two sections of this paper take the form of a literature review, providing an overview of some of the most important research undertaken by academics and labour experts regarding the subject. In the section titled Effects of Anti-Scab Legislation on the Frequency and Duration of Labour Disputes, we will share some other studies that connect the use of scabs with more entrenched and protracted labour disputes. In this section, we will also briefly explore some of the challenges in assessing and comparing anti-scab legislation across jurisdictions.

During the 2018 lockout by D-J Composites, Unifor launched a “name and shame” campaign to raise awareness about the employer’s use of scabs, drawing attention to the fact that scabs unnecessarily prolong labour disputes and undermine fair settlements.

Finally, in Effects of Anti-scab Legislation on Health and Safety, we will explore some of the most serious implications of the presence – or lack – of effective and fair anti-scab legislation. 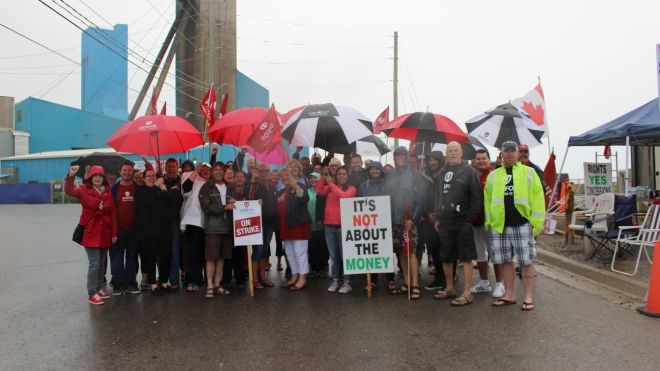 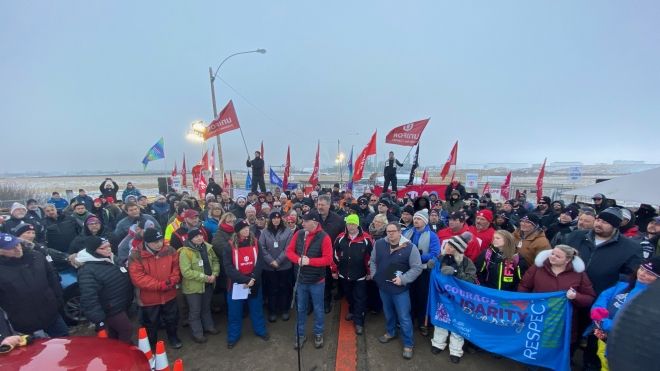