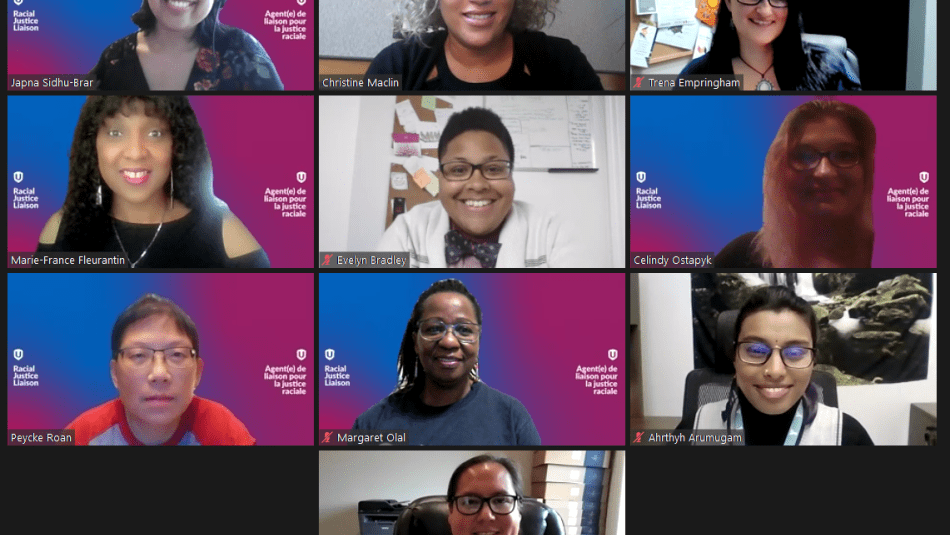 In order to make change with racial justice, you need not only one voice – but many, from all walks of life.

Unifor, committed to uniting, learning and supporting each other to build a truly anti-racist labour movement and world, has been actively finding solutions on how to make that a reality.

That long-standing work is currently translating to seven virtual Unifor racial justice forums that began last week and which run until Oct. 16, 2021, from coast-to-coast.

The sessions bring together union leadership, activists, employers and community organizations to brainstorm new ideas, tools, strategies and policies for racial justice, whether in union locals, workplaces and communities.

In the first session based in the Atlantic region, the theme focused on “Fostering Spaces of Belonging.” Moderated by Unifor Racial Justice Liaison Japna Sidhu-Brar, activist Trena Empringham and diversity, equity and inclusion advisor Evelyn Bradley spoke about building a workspace that’s safe and accountable by strong leadership who cares.

“Why does it matter? It has to matter,” said Empringham in the forum. “If we don’t correct things now, what we do today affects the next generations. It’s all of our responsibilities for making it safe. It won’t be fixed and healed overnight, but we all share the responsibility.”

Bradley said she puts energy into anti-racist work is because “there’s freedom in being able to hold someone accountable for the way they are responding or acting in the workspace.”

“It’s very necessary to have these kinds of conversations to peel back the layers of what it means to do this work, for long-term,” Bradley added.

These forums are a part of the federal government’s Anti-Racism Action Program grant in 2020 that Unifor was accepted for.

One of the forums was specifically tailored for Black, Indigenous and People of Colour to share and voice “our own internal racism and through colonization and how racism has been taught within our own communities that experience racism,” said Unifor Human Rights Director Christine Maclin.

“The key here is we have to push workers of colour to apply for union jobs,” said Racial Justice Liaison Peycke Roan in that session. “The more of us who can get through the door, eventually, we can get to certain positions where we can make real change.”

Like her father, Maclin was a rank-and-file union member, building cars on the Chrysler assembly line.

She remembers when she was still new on the job, she received a message that her dad, a 38-year veteran worker, was in a dispute at the plant.

“I found out a man called him a racial slur, threw his bag out of the changeroom and told him he didn’t belong,” she said.

She was surprised that he wasn’t going to bring it up to the employer or the union.

“He told me, ‘It’s not about trust. I love my union. But they would only tell that person what they did was wrong. And then what?’” she said. “That has stuck with me for years.”

Maclin said in her case, she fought to put inclusive racial justice language into the workplace and “it became creating a role for Black, Indigenous, people of colour could have somebody to go to for support and follow-up, guidance and help around dealing with racial discrimination in workplaces.” That work has tied into Unifor’s overall efforts to address racial justice.

The forums are structured to have breakout sessions, where employers, community organizations, union leadership, members, can brainstorm tools and resources.

There is a follow-up forum scheduled in March to build upon the existing racial justice work. Those who have tried the tools and resources that came out of the forums are invited to do a refresher talk.

“We have to understand this is maybe the first steps, but the reality is this work needs to continually develop and update and renew as it goes on,” said Maclin.