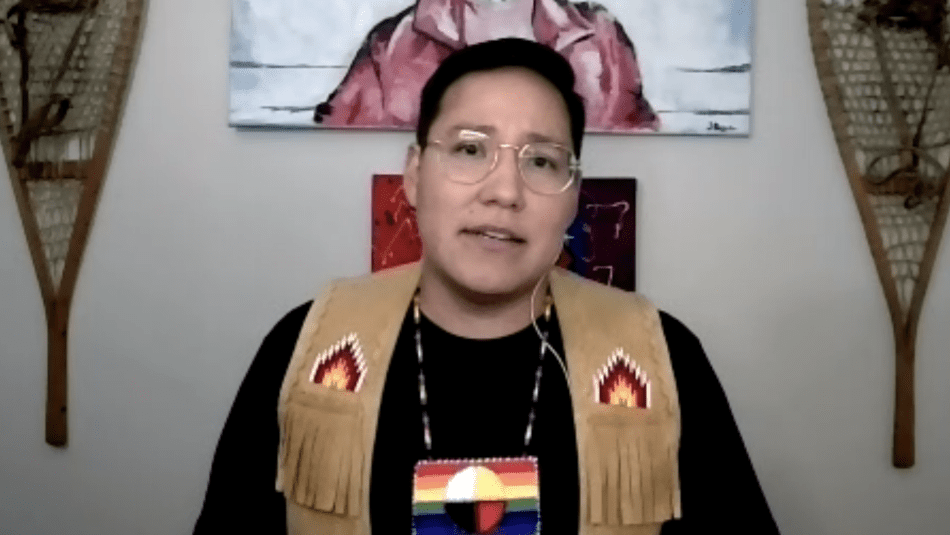 More than 70 members, staff, and union leadership joined an Education Department webinar about the gender fluid traditions of First Nations. It was coordinated as one of the ways Unifor is celebrating both National Indigenous Peoples’ Day and Pride month.

The session was the fourteenth in the Turtle Island series led by Unifor Indigenous Communities Liaison Gina Smoke.

Saddleback used personal experience to discuss the impact of colonial concepts of gender on contemporary identities both inside and outside Indigenous communities.

From a young age he didn’t “fit” the rigid binary categories of gender and had to slowly un-learn colonial norms and uncover traditional Indigenous teachings to understand the more nuanced and fluid gender system of his Cree ancestors.

Saddleback explained that, in the Cree creation story, the first being is intersex and non-binary. He said Cree peoples have historically seen human bodies as only the physical vessel for a genderless spirit who is not fundamentally tied to the sex organs of any one body.

Many within his own family, while supportive, also initially held colonial beliefs about gender because of the multi-generational oppression and alienation from certain parts of their culture, ranging from total language prohibition in residential schools to police raids to stop traditional ceremonies.

Saddleback shared multiple First Nations’ ideas about gender including the Navaho, who believe in three genders, to his traditional Cree, who have named five.

“There are no closets in tipis” - Jack Saddleback

The webinar concluded with suggestions for how to participate in “actionable allyship”, including championing gender inclusive policies (eg. gender neutral washrooms); avoid pronoun assumptions; and understand “family” is more than nuclear.

Going forward, Saddleback suggested using the Cree concept of Sâkihito-Maskihkiy: love medicine. Understanding and embracing a more fluid gender identities is a practice of sharing and healing that contributes to social solidarity.