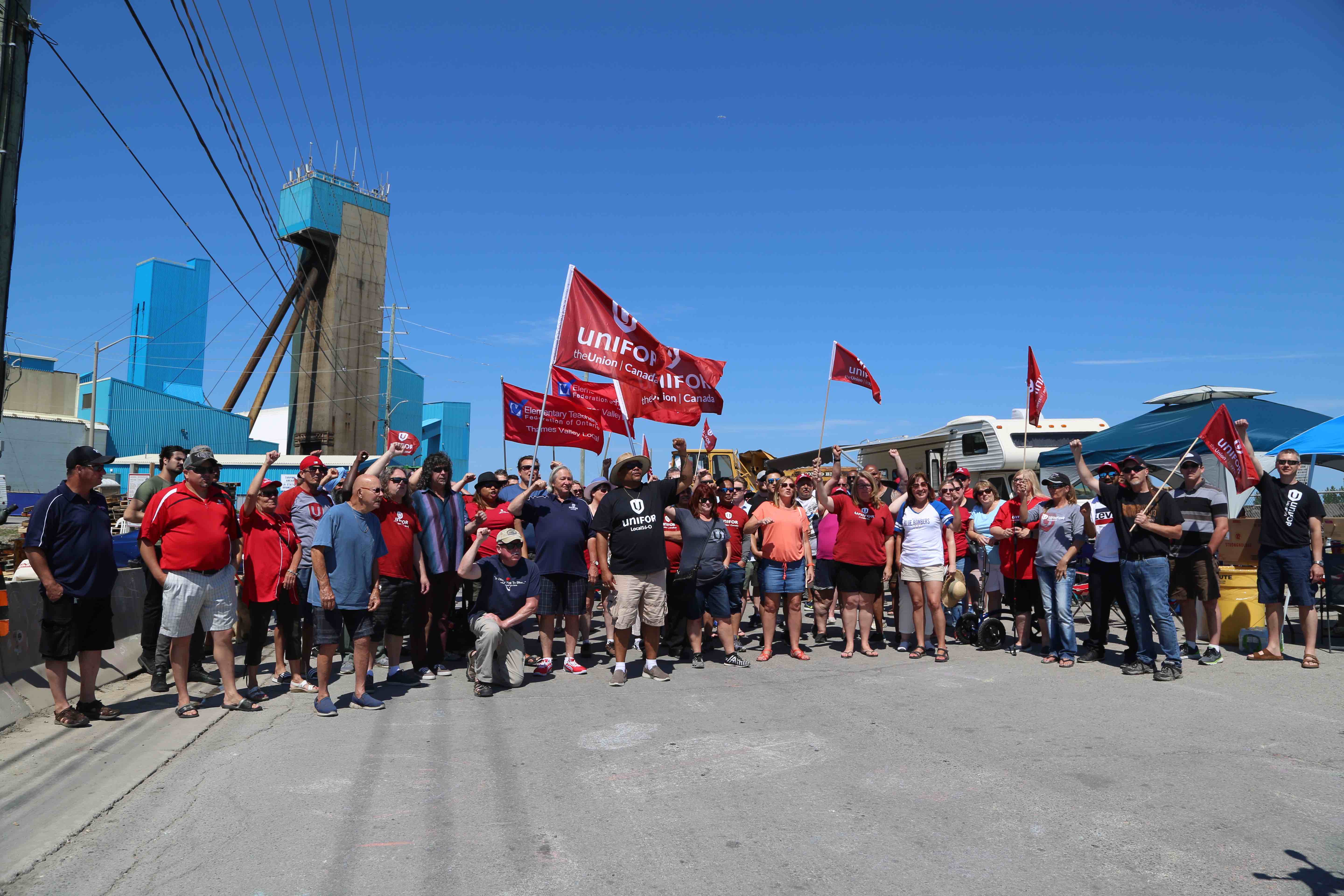 GARY LYNCH
Gary Lynch is the former President of Local 16-0 and was President during the 2019 strike at the Compass Minerals Salt Mine in Goderich Ontario, where the employer bussed in scabs to prolong the dispute.

How did the dispute at Compass Minerals in Goderich begin?

We were at the table for probably 10 to 12 bargaining sessions, and the company gave no indication of even entertaining any of our proposals. They constantly kept bringing concessions to the table and, and it seemed like they had a hidden agenda that we weren’t aware of, which was ultimately for replacement workers – scabs – to come in and take over the mine. They obviously needed some time to put it all in place, get them into housing, and their plan ready. We were unaware of this at the time, but there were some certain indications because they never did entertain our proposals or sit down and talk. But at a certain point, we just knew something was up.

One day, we started to see brand new coach busses roll in. And the members, with their spouses and families that were down on the picket line stand there watching these buses roll in, filled with scab workers. Obviously, everybody’s hearts sank. We knew that we were in for a long haul. This is a great tactic by the company – nothing but concessions ever hit the table after that, there was no fair bargaining, and unfortunately no going back. This leads to anxiety for the families, and our members were hit hard, with no paycheques.

By bringing in replacement workers, how did the employer affect the dispute?

It seems like they don’t want to bargain fairly, and it just prolongs the dispute. In our work culture, being in an underground mine, the integrity of the mine – our workplace – it’s all impacted. And when we got to go back down there, we didn’t know what we’d find heading in – there’s ground control that we know was probably never done properly. It wasn’t like what we would do. You know, where was the skilled labour? Where are the guys with 20, 30, 40, 50 years of training and skills that we’ve learned over the years? And these guys just come flying in from out of province, you know, settled down in Kitchener, two hours away. Like I said, they were coached in. The scabs put videos all over the internet and Facebook, laughing at us, down there having a great time, carrying on. But you know, we’ve seen it. The impact is horrible. The mine was a disaster when we went back.

The company’s telling you that, “Oh yeah, we’re business as usual, pumping out the salt,” but you know, when the buses were heading home and it was over, it was just horrifying.

What was the impact of the dispute on the local community?

Well, first off, I think community was a huge part of this – obviously our fellow Unifor members from the area showed and supported us, and showed up on the line every day. Every waking hour, and I’m not kidding. We had thousands of people here for a small town of 5,000.

I bet you two thirds of the town at one point in time showed up here on the line. They’d bring dinners down here. The nurses from the hospital, the school teachers sent support. This mine has been here 60 years, and almost every household has someone who worked here in some capacity.

When employers do this, they take most of the money from the small merchants in town. Business just comes to a crashing halt – they depend on the miners. I mean, all the other good jobs in town have left, due to free trade and other things.

You know, it’s not rocket science. Anybody that has a job will fight for their job. That’s what we come to work for – to support our families. And when you take that away, everybody bands together because they know what’s right and wrong.

How do you think the use of scabs in the last round of bargaining will affect how you and your members feel about going into the next round?

Like any local union, at times we all don’t agree on everything that is brought forward, whether it’s from the union executive or from management. But when they do something like this, it brought our local so close together, especially when the gloom cut so deep.

But that’s all I get now – three years later, I walked to the square to go to Tim Horton’s and people know that we’re up for negotiations. To me, that’s shocking. It’s like, wow, you guys remembered.

I think the strike brought us all closer together, you know? And at the end of the day, we did walk those scabs off the property – probably the proudest moment of my life. It just created a huge solidarity through our local. I know we sent a strong message and took a stand. And I’ll never forget that morning, waking up to that footage and it cutting to a video of Jerry walking the scabs out.

Lance Greer is the Vice-President of Local 16-0 and was a member of the Local Executive during the 2019 strike at the Compass Minerals Salt Mine in Goderich, Ontario.

What was your experience like during the 2018 labour dispute at the mine?

I remember in July 2018, having to watch those white buses rolling in. My kids were teenagers at the time, and they knew what it meant. It was a kick in the face for the most part. There’s young kids that shouldn’t have understood what those white buses were, and what they represented and what they were doing to the community. We even had people that needed to leave the community for a little while to work at different places, in different mines. And that impacted the community as a whole, because we didn’t have money being spent here. There wasn’t the same disposable income going around, so the whole town, the whole community, felt what was going on with the fact that we had scabs.

How does the use of scabs change the balance of power in bargaining?

It means your boss can just say to you the workers, “I don’t have to negotiate with you. I’ll just bring in some buddies from New Brunswick on a bus.” Collective bargaining is supposed to be fair, but it gives them a complete upper hand. You can’t go to the table and expect to have a fair deal, or even have the chance to express your position in the bargaining process. If the employers have the option of not even talking to people, and still getting their product out, it’s absolutely tipping the balance and the scales in the company’s favour.

What do you think was the impact of the use of scabs on the length of the dispute in Goderich?

I aged quite a bit that summer! I will tell you, the fact is that we went days, weeks, and eventually months without them actually coming to the table to legitimately negotiate. And that really affected how we were going to actually reach a deal. In the end, the only reason that they came back to the table was because we took away their ability to have the scabs at the mine. Once it was clear they weren’t getting in or out – once they got it – that was it. That was the only reason they came back to settle.

If you could talk to one of the scabs that crossed the picket line, what would you say to them?

For us, it’s our right to belong to a union. It’s our constitutional right to belong to a union. And we believe in that – we believe in the fact that we have collective bargaining power in that fashion. When you have somebody else come and take your job, the fact is we are no longer able to go to the bargaining table and bargain a fair and equal agreement for the workers.

If your employer had been able to continue to use scabs, what do you think would have been the outcome there?

For us, we were really sure there would have been some sort of serious accident at the mine. And the dispute would have been prolonged. But in terms of an accident, the fact is we were worried about the mine as a whole, and would we even have a place to go back to work? That was a serious concern that we still talk about today.

These people the company had hired to come and do our jobs had no skills whatsoever and were working 12 to 16 hour days.