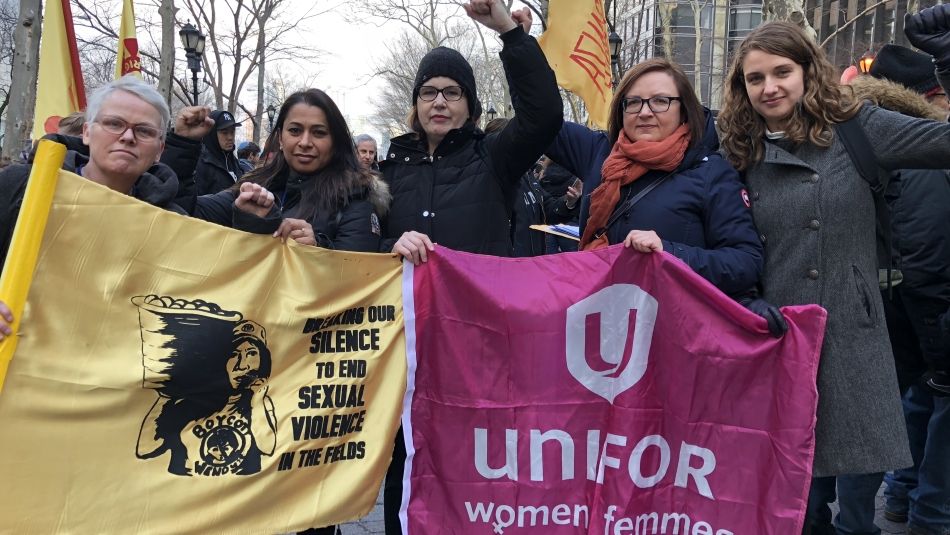 The United Nations Commission on the Status of Women (CSW) is the global intergovernmental body exclusively dedicated to the promotion of gender equality and the empowerment of women. The CSW promotes women’s rights, documents the reality of women’s lives throughout the world, and shapes global standards.

Here are their reflections on the vital work of the UNCSW and what’s still to be done in achieving gender equity.

“Not only are working conditions difficult and dangerous with poor access to transportation, medical, educational and vital community services – California farmworkers and their families but these workers are also combating increasing racism and discrimination. Empowering Rural Women and Girls behind the Digital Curtains” featured a panel of Women and Indigenous Farmworkers’ organizations that described the critical work they are doing to eradicate the oppression that Farmworkers, particularly women and Indigenous farmworkers face.

The Organization “Act for Women and Girls” described the critical work they are doing to eradicate the oppression that lies deep in the roots of California’s Central Valley region. ACT has created a movement of social justice leaders who raise their voices to impact their community, state and country."

“I am struck by how organizing is consistent across borders. Though the specifics of the struggles that we face are different, from attacks on reproductive freedoms to painful gender-based violence and colonialism, and the outcomes we seek are varied, the formula is the same- educate and organize your communities, and keep pushing until you win and eradicate the violence.

In Ontario, I mourn the seven women who have been murdered in cases of domestic violence already- this early in the year, and whose deaths have been reported by media. Their lives should not have been taken. The only thing we can and must do is to organize in our communities and our union to stop the violence, just like women are doing around the globe.”

“There was a significant focus on Indigenous women and girls and the reality they face across the planet, one of exploitation, violence and higher rates of murder. But here too, women are using their voices in new and profound ways. They are organizing and mobilizing, taking political and media space and refusing to allow what often seems like insurmountable odds on the path to full equality to hamper their work.

Women, everywhere, from rural Norway to Kenya to northern Canada, still fighting. Still resisting. Still living with violence. Still surviving. Still demanding full rights and equality. And still telling their stories.  Perhaps finally this is the time of profound change. For certain, it won’t happen without all these women pushing together.”

Lisa Kelly, Women’s Director
“The knowledge, information and contacts from these sessions will be helpful to our continuing gender equality work back in Canada. Representatives from Uruguay work on ensuring care obligations don’t lead to inequality for women in pensions or other social security programs. The government is also implementing universal child care. The representatives credited the feminist movement for pushing and achieving these measures.

The Icelandic government has accelerated gender equality through effective pay equity, child care and shared parental leave to the point where the former mayor of Reykjavik said that her children, when waking in the middle of the night, were just as likely to call out for their father as they were for her.”

“It is informative to hear from women on the front lines of economic, reproductive and racial justice across the world. The fight for decent work is connected in so many ways to the struggle for women's rights.

Reproductive justice is not only a fight for access to abortions, but it is also recognizing that precarious economic situations and the lack of affordable child care stand in the way of women and their ability to shape their own lives. It is up to all of us to build a labour movement that is inclusive, anti-oppressive, and a true force of advancement for all women.”

Unifor is committed to ending gender-based violence and working with partners around the world to reach that goal. The wider labour movement must empower all women. Those priorities were reflected at the UNCSW62 meetings and the work continues throughout the year.