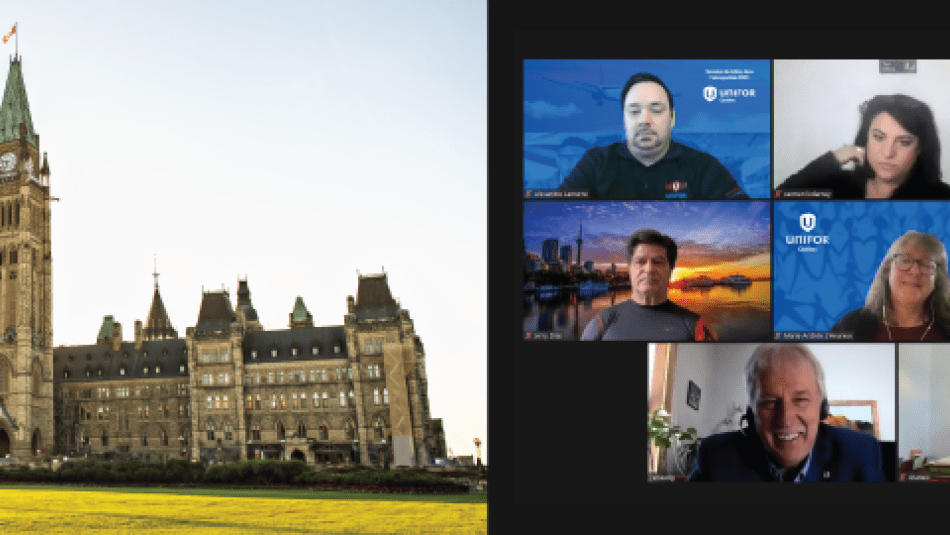 Like so many industries, Canada’s aerospace sector is in trouble.

Most of the world’s aircraft fleets remain grounded amid tightening travel restrictions. This situation has begun to spill over into Canada’s aerospace industry, threatening to send aircraft manufacturing into a tailspin.

“It wasn’t long ago that 40 % of our aerospace members were laid off. The situation improved, but now we’re headed towards dangerous territory if the government doesn’t act,” said Jerry Dias, Unifor National President. “The introduction of new travel restrictions came without any new financial support for our aerospace and airline workers. That decision jeopardizes every aspect of Canada’s air travel infrastructure including advanced aerospace manufacturing.”

In response to the economic crisis, Unifor’s Aerospace Industry Council organized more than 100 meetings between union representatives and federal government Ministers, Members of Parliament from all parties, and senior staff to discuss the union’s proposal for a comprehensive recovery plan for the sector. The effort was Unifor’s single largest lobbying campaign to date.

“The response has been incredible. We’ve received overwhelming support from members of every political party and positive responses from key ministers in the federal government,” said Carmen Ledarney, Unifor’s Aerospace Director. “Even though this was a substantial undertaking for the union, our job isn’t over yet. We will continue to put pressure on the federal government until we see these recommendations fully implemented.”

An unprecedented decline in air travel brought on by pandemic-related travel restrictions has left empty order books for many of Canada’s major commercial aircraft manufacturers. The downturn is translating into fresh waves of layoffs hitting workplaces from British Columbia to Newfoundland and Labrador. Quebec has been particularly hard hit with significant layoffs expected at CAE, a manufacturer of flight and other simulator technologies as its ventilator manufacturing comes to an end, and Pratt and Whitney as the aircraft engine manufacturer reports a decline in long-term demand due to the COVID-19 pandemic.

“We are deeply concerned about what’s happening to our industry. Layoffs are happening at an alarming rate in every region of the country,” said Alexandre Lamarre, Unifor Aerospace Industry Council President. “In Quebec, aerospace is part of our DNA. At CMC Electronics in Saint-Laurent, 20 per cent of our members were laid off, many just before Christmas. It’s devastating and more layoffs may be coming if nothing is done. We have to see real government intervention to protect these valuable jobs immediately.”

While the federal government continues to postpone direct financial relief for the industry, aircraft manufacturers have few options and workers face an increasingly uncertain future. In perhaps the most acute example, Unifor members at De Havilland Aircraft in Toronto, Ontario report that the plant can only sustain work until spring 2021.

“Each job this industry loses is a huge blow,” added Dias. “These are highly-skilled workers making the high-tech products that our economy desperately needs. We need a solution that protects every aerospace job possible.”