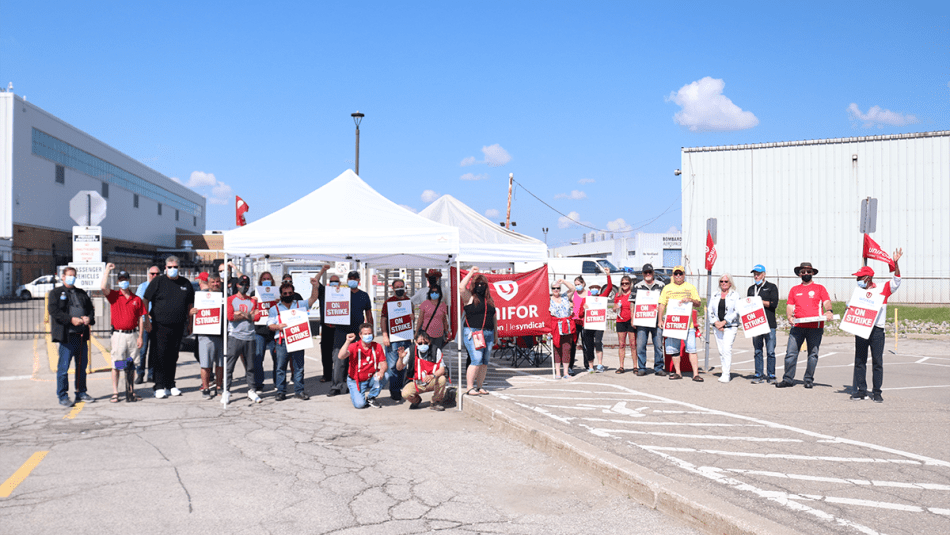 TORONTO–An overreaching injunction issued by Justice Fred Myers against Unifor members who are on strike and picketing at De Havilland Aircraft of Canada is an affront to workers’ rights, says Canada’s largest private sector union.

The injunction issued by the Ontario Superior Court on August 17, 2021 imposes conditions on union members that Unifor believes are extreme and unfair and orders an end to the union’s protest activities.

“Justice Myers had a great deal of discretion yet chose to side with the interests of wealthy corporate owners over those of the community, the 700 workers and their families,” said Jerry Dias, Unifor National President. “This injunction silences our members and stops workers from picketing peacefully against De Havilland.”

De Havilland workers have been on strike since August 1, 2021. The labour dispute concerns the future location of De Havilland’s manufacturing of the Dash 8 program.

After the company bargained in bad faith, reneged on an agreement to continue negotiations, and began using scabs at the Downsview plant, the union launched a peaceful protest to pressure the company to commit that Dash 8 manufacturing would remain within a reasonable radius of the current Downsview site, if and when De Havilland resumes assembly of the Dash 8. Unifor members have been building the Dash 8 aircraft for nearly 40 years.

“To call this injunction an abomination is an understatement. This is a new low for workers’ rights in this province,” Dias added. “Limiting our members’ picketing activities to just one person walking the line for sixty seconds every five minutes is preposterous and in my experience this has to be one of the worst injunctions I have seen.”

“This injunction adds insult to injury. This dispute with De Havilland and its parent company Longview Aviation Capital can only be resolved at the bargaining table, not by the courts or police. Losing 700 good jobs in Ontario is on Judge Myer’s head,” said Dias.

The union continues to urge De Havilland to work with the union to save jobs and secure a new location for the Dash 8 platform to stop union members’ jobs from leaving the province.