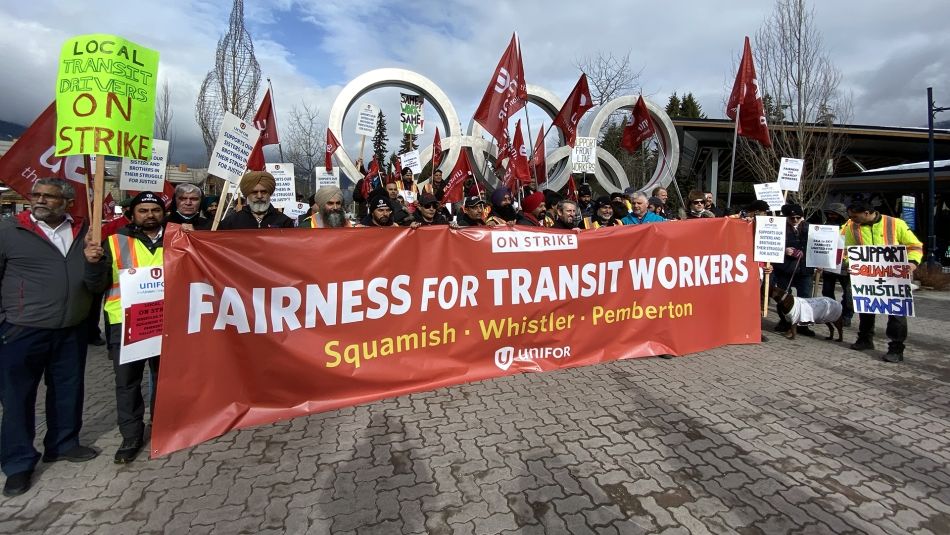 “We were successful at closing an unacceptable wage inequality between transit workers in Vancouver and the Sea to Sky region,” said Gavin McGarrigle, Unifor Western Regional Director. “Local 114 members are eager to return to serving the communities of Squamish, Whistler, and Pemberton.”

“This incredible victory for livable wages wouldn’t have been possible without the rock-solid picket line solidarity and the unwavering support of Sea to Sky communities,” he added.

Special Mediator Vince Ready met with the parties on June 6, 2022 to review the outstanding issues and accept proposals for a resolution. In his recommendations to the parties and the Minister of Labour, Ready agreed it was “irrefutable” that the cost of living in the region were problematic and contributing to the bargaining impasse. As a result, it was recommended that a cost of living adjustment be paid based on the B.C. Monthly Consumer Price Index. If average CPI increase exceeds the average annual wage increase negotiated for 2021 to 2023, the employer will add the difference to the existing 4% wage increase effective on April 1, 2024.

“Unifor members have set the standard for workers across British Columbia. As inflation rises, wages must keep up,” said McGarrigle. “We will take this principle to negotiations in every sector. Workers demand fair wages and a decent standard of living.”

The new five-year collective agreement (retroactive to April 2020) includes annual wage increases of 1.5%, 2%, 3%, 3%, 4% for a total 13.5% increase over the term, plus a 2% signing bonus for 2022. Pensions for the transit workers will migrate from an employer RRSP top-up to a CAAT pension plan. The union also won full benefit coverage for part-time workers, who were previously excluded from the benefits plan.

Unifor attributes part of the accomplishment to the willingness of the Horgan government to respect the collective bargaining process: “Free collective bargaining is a fair process that can achieve important advances for workers. If we listened to the mayors and B.C. Liberals who wanted to impose a contract, I guarantee you we would still be on strike, legal or not, for months to come,” said McGarrigle.