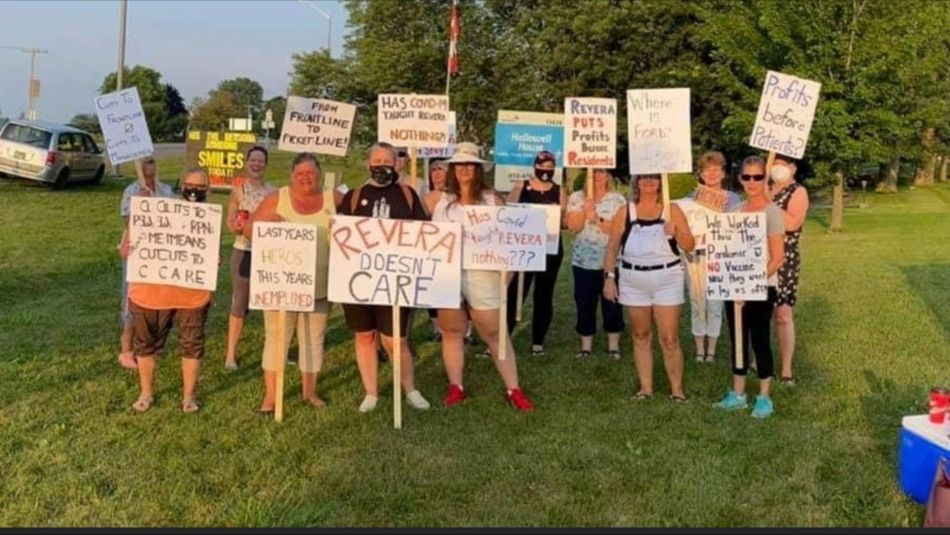 PICTON —Revera plans to cut long-term care jobs at Hallowell House in Picton, Ontario during the fourth wave of COVID-19.

"Clearly Revera has learned nothing during this pandemic," said Unifor National President Jerry Dias. "Revera is determined to maintain skeleton staff levels to care for residents as it continues its profit over people business model."

The union was notified weeks ago that new schedules would be implemented that reduced the number of full-time PSW’s and RPN’s. The announced staff reduction comes following a provincial mandate to reduce occupancy in wardrooms from four to two, resulting in a reduction in the total number of residents.

The union has countered with solutions to avoid layoffs but the employer has yet to officially respond, though they have delayed the reductions for four weeks past the August 27th implementation plan.

This week Hallowell House workers began a daily information picket from 6 a.m. to 6 p.m., braving extreme heat to notify the community of the impending job cuts. Katha Fortier, Assistant to the Unifor National President will join workers on the line today at 3 p.m. and is available for media interviews.

"The workers are fighting for residents and for themselves. The public and the families need to know these job cuts will mean less care for residents than they currently have,” said Brooks. “This is not the time for Revera to remove trained staff.”

“It’s a known fact that there is a shortage of trained long-term care workers combined with a severe retention issue but Revera is throwing these COVID-heroes to the curb so it can keep up payments to shareholders,” said Dias. “This illustrates the need for Ontario to accelerate the standard of four hours of daily care per resident scheduled to take effect by 2025 so that these for-profit homes will have to maintain proper staffing levels.”