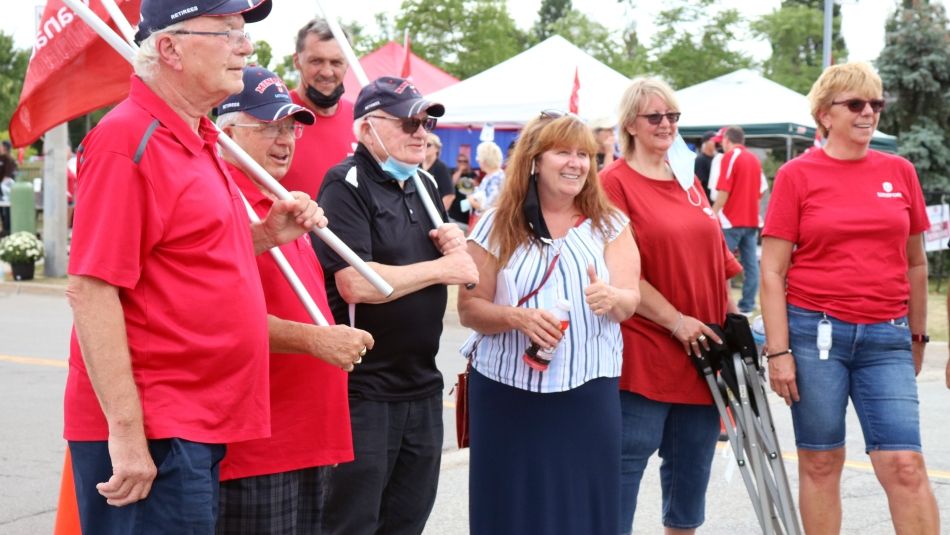 Unifor retirees drove to Toronto from as far as Windsor and Sudbury on Monday to join the picket line for striking workers at De Havilland and show their support.

“The great thing about retirees is that they have been through t his sort of thing before and so they want to show their support,” said Barb Dolan, Unifor Retirees Director.

She said the about 140 retirees came from the Toronto area, Kitchener, London, Oshawa, Ajax Windsor and Sudbury, forming car pools in their communities to ensure a good showing.

Members of Locals 112 and 673 have been on strike since July 27. Parent company Longview Aviation Capital announced earlier this year it would no longer build the new Dash 8-400 aircraft at the Downsview plant – a central issue in the strike.

Local 673 President Maryellen McIlmoyle said having retirees on the picket line gives the members a boost and shows the company that the strikers have support across Unifor.

“We want them back at the table, and the only way to do that is boots on the ground,” she said.

Maria Pinto, a De Havilland retiree and Local 673 member, said she came out to help the workers as they fight for good jobs at the plant.

“This plant gave us the possibility of a good life,” said Pinto, whose son now works at the plant.

“Longview is not stronger than us, and every day that we are on the picket line we are getting stronger.”

At the urging of Local 112 retiree Victor Pierrynowski, a collection was taken up from among the retirees to support the strikers.

“We need to leave here offering more than good wishes,” he said.