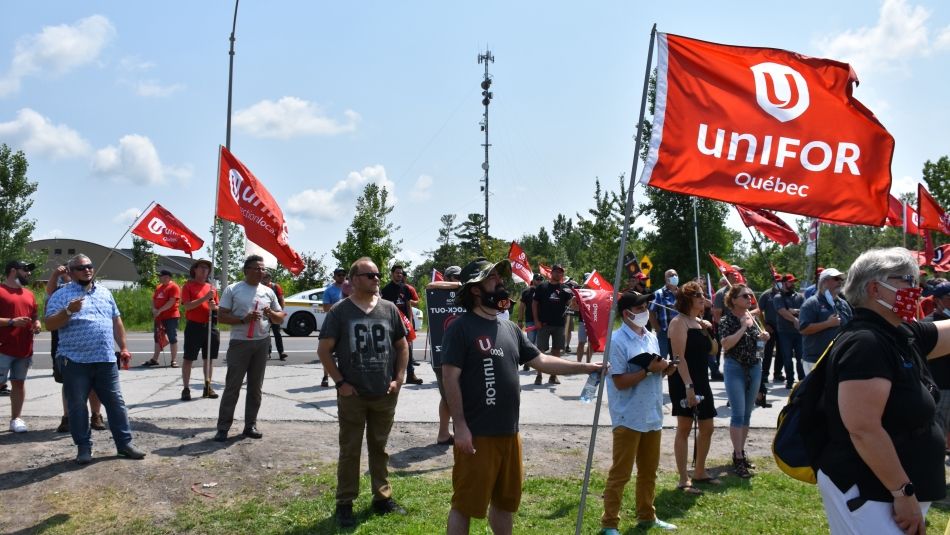 More than 100 Unifor members and allies responded to the union’s call to support a solidarity action on July 15 for workers at the Ash Grove cement plant in Joliette, Que, locked out since May 22.

“It was important for us to do this demonstration. As in any labour dispute, those on the frontlines sometimes forget that there are hundreds of thousands of people behind them,” said Québec Director Renaud Gagné.

“We are by your side today and we will be there tomorrow.”

Unifor National President Jerry Dias has appealed to all Unifor locals across Canada to offer financial support for the cement plant workers.

In addition to the dozens of members from other union locals, federal MPs and provincial MNAs for the Joliette riding also came out to show their support. Gabriel Sainte-Marie of the Bloc Québécois and Véronique Hivon of the Parti Québécois forcefully called for a resolution to the dispute, blaming the employer for its stubbornness in this matter.

The members of Local 177 have been locked out since May 22. While negotiations are ongoing with the employer, the dispute is dragging out and many points remain unresolved. The employer is trying to force several concessions from the members of the local, in particular on the issue of outsourcing. As well, dozens will lose their jobs with the closure of two of the four ovens.

“Under such difficult circumstances, it was important to let our brothers and sisters know that they are not alone. I am proud of our locals who responded to the call. I sincerely hope that we will be able to find a solution to this dispute in the coming days and weeks. In the meantime, we are determined to reach a just resolution for our members,” said Gagné.