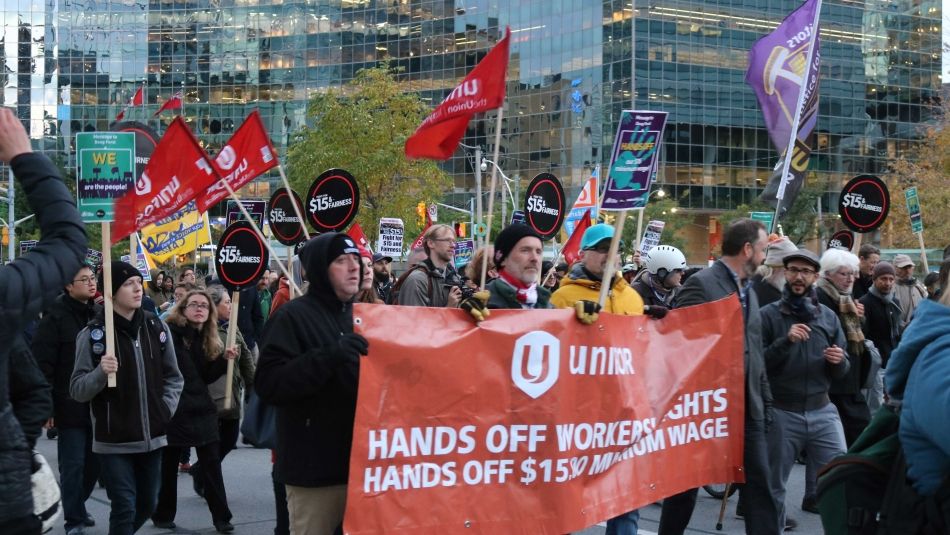 As Ontario heads towards a June 2nd election, there are increasing concerns regarding the growing lack of income security and affordability in the province.

As a result, Ontario’s political parties are hitting the campaign trail promoting their policies to alleviate economic hardship faced by low and middle-income workers, including promises to raise minimum wage rates. The NDP, for instance, has promised to increase the minimum wage to $20 in 2026. The Liberals, meanwhile, announced an increase to $16 as of Jan 1st, 2023, and the Green Party of Ontario has made a general statement on raising the minimum wage.

Doug Ford’s Progressive Conservatives, have signaled their intention to increase the minimum wage to $15.50 as of October 1, 2022, spinning the yearly CPI adjusted increase as an election promise. Workers, however, have not forgotten how Ford scrapped the scheduled minimum wage increase from $14 to $15 in 2019 when coming into power, introducing instead an ineffective low-wage tax credit in its place. Late last year, the government backtracked, announcing an increase to $15 as of January 1st, 2022.

In anticipation of Ontario minimum wage policy playing a role in this year’s election, and the usual alarmism from the pro-business lobby, it is worth providing a snapshot on where Ontario’s minimum wage workforce is working – particularly as calls from advocates grow on building towards a $20 minimum wage.

These figures demonstrate the continued need to advocate for fair minimum wage rates, both as an economic stimulator and to protect low-wage workers from on-going exploitation by big corporations that have the most to profit and gain from maintaining a low-wage workforce. Labour and community advocates must ensure that all political parties commit to and make fair wages and strong employment standards key components to their election platforms, to ensure that low-wage workers do not fall further behind as the cost of living escalates.