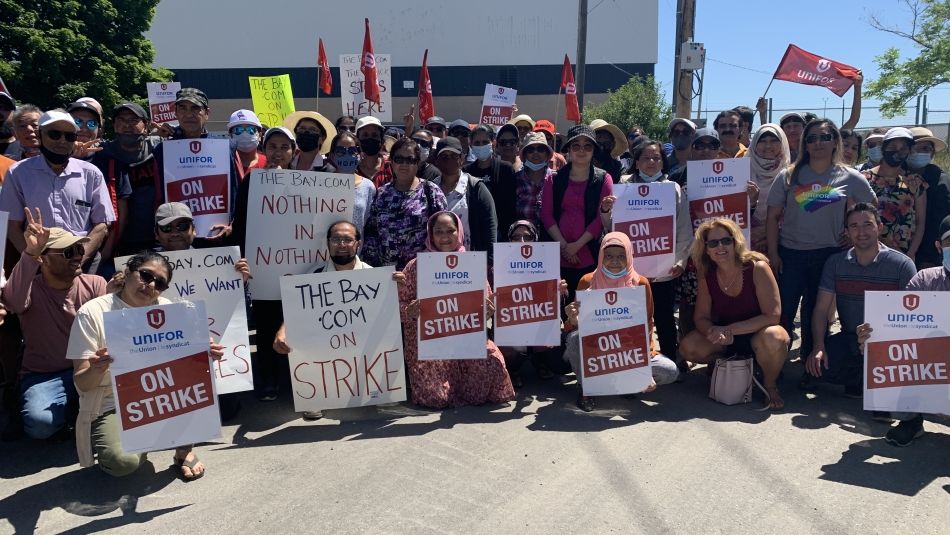 RE: Use of scabs at Unifor strike at HBC Logistics in Scarborough

I am writing to request an urgent meeting to discuss the situation unfolding in Scarborough, where more than 330 e-commerce warehouse workers at HBC Logistics have been on strike since 12 p.m. on June 22, 2022. Less than 48 hours after the commencement of the dispute, the employer has already made repeated attempts to bus in scabs to disrupt the strike and undermine the workers’ ability to bargain and settle a fair contract.

These e-commerce warehouse workers helped The Bay cope with a surge in online and curbside shopping during COVID-19, even postponing bargaining when their collective agreement expired in May 2021. Had they negotiated then they would have received an increase but now it appears Canada’s flagship retailer is cynically exploiting the goodwill of its employees to cheat workers out of the pay increase they should and would have received by refusing retroactive pay.

Workers in Ontario deserve the ability to collectively bargain fair contracts that help support themselves and their families, free from the threat posed by the employers’ use of scabs.

In March 2021, Unifor released a discussion paper called Fairness on the Line: the case for anti-scab legislation in Canada. In this paper, we showed how the use of scabs:

•    Undermines workers’ collective power;
•    Unnecessarily prolongs labour disputes;
•    Removes the essential power that the withdrawal of labour is supposed to give workers to help end a dispute, that is, the ability to apply economic pressure;
•    Contributes to higher-conflict picket lines;
•    Jeopardizes workplace safety;
•    De-stabilizes normalized labour relations between workers and their employers; and
•    Removes the employer incentive to negotiate and settle fair contracts.

Since March 2021, we have campaigned nationally, provincially and locally to support the establishment of strong anti-scab legislation at the federal and provincial level across Canada, including for the strengthening of such legislation in jurisdictions where it already exists.

In March 2022, the federal Liberals and NDP announced they have entered into a “supply-and-confidence agreement” (SACA). Included in that agreement was the commitment to introduce legislation by the end of 2023 to prohibit the use of scabs when a union employer in a federally regulated industry has locked out employees or in the case of strike action. We continue to push to have this much-needed legislation passed sooner than the end of 2023.

The aggressive anti-worker behaviour of HBC Logistics is yet another example of why we urgently need strong anti-scab legislation here in Ontario as well.

In 2018, almost 300 members of Unifor Local 16-O working at for Compass Minerals in Goderich, ON went on strike after rejecting a sub-standard company proposal. In April of this year, approximately 160 Unifor Local 1859 members at auto parts manufacturer THK Rhythm Automotive went on a three-day strike, during which their employer made use of replacement workers. Earlier this month, 220 members represented by Unifor Local 112 and working at UTIL Canada Ltd. went on strike, and their employer also used replacement workers.

I respectfully request a meeting as soon as possible to discuss this concerning situation, and tell you more about the experiences of the warehouse workers at HBC Logistics in Scarborough. Throughout the recent election, you championed the cause of working people in Ontario, and we look forward to working with you to help them take another step forward through the enactment of anti-scab legislation in Ontario.