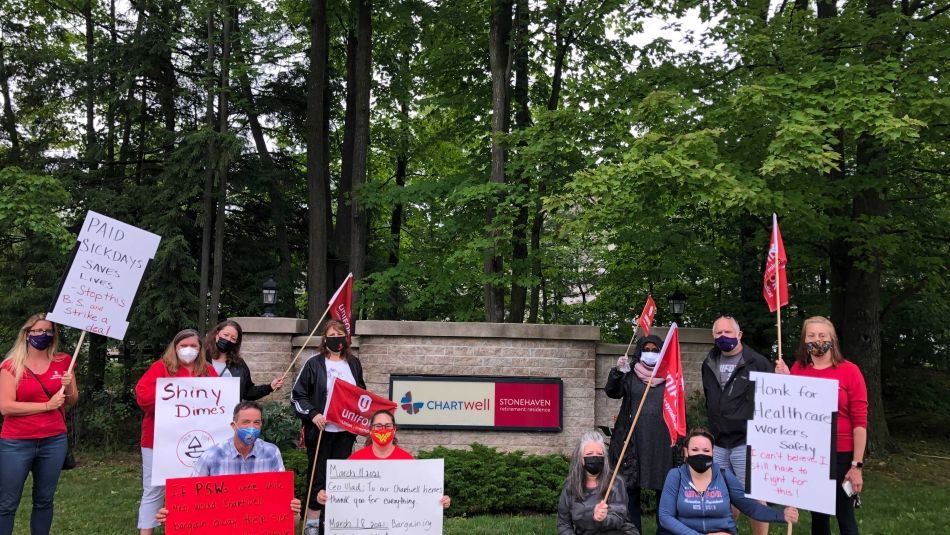 "Chartwell is demanding that these COVID heroes reduce their negotiated sick days by 40 per cent, that is outrageous and irresponsible," said Norma Laury, Vice President of Unifor Local 8300. "While many LTC employers are improving sick leave provisions, greedy Chartwell is shamefully proposing cuts. This for-proft company needs to stop putting profits before people, including those they are paid to care for."

Contract negotiations opened with Chartwell Stonehaven on March 18, 2021. The union proposed modest changes to the collective agreement that were immediately rejected by the employer. The employer proposals included reductions to sick leave provisions and bereavement leave.

"Chartwell wants to reduce sick leave during a pandemic when employers should have no issues with workers taking sick days when they are unwell," said Derek MacLeod, Unifor National Staff Representative. "It seems that greed is the employer's priority rather than having the best interest of its workers and residents."

The pandemic has exposed the health and safety issues facing workers and residents at Chartwell Homes across the province. As of December 18, 2020, Chartwell was in the top three for nursing home deaths in Ontario. The union believes that Chartwell should be encouraging and removing barriers to any employee who needs to stay home if feeling ill.

The union is steadfast in its resolve to bargain an agreement that fits the needs of the members working at Chartwell Stonehaven.

To arrange in person, phone or FaceTime interviews or for more information please contact Unifor Communications Representative Sarah McCue at @email or  416-458-3307 (cell).