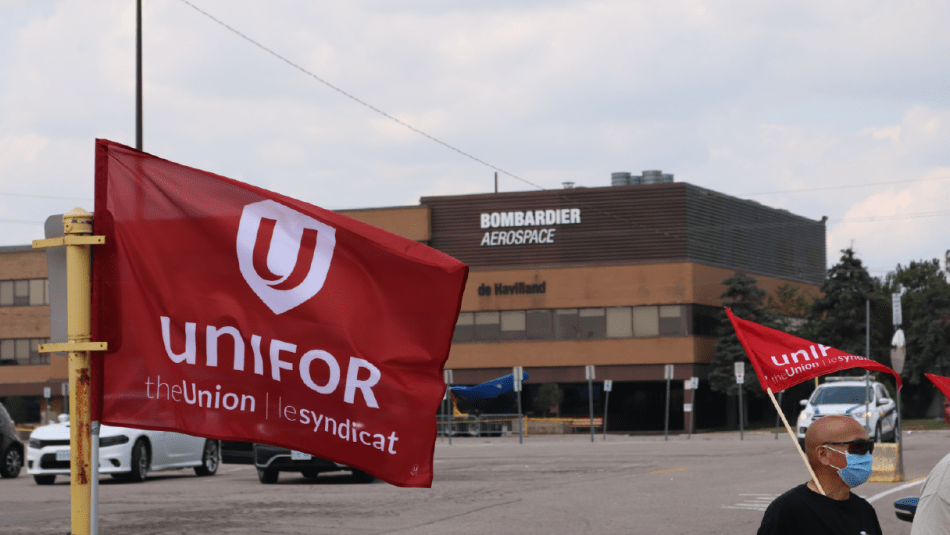 TORONTO–More than 700 De Havilland workers at the Downsview plant remain on strike after the continued negotiations with the company failed to resolve the dispute.

“Union members at the Downsview plant have always clocked in together, worked together, bargained together, and, when necessary, gone on strike together,” said Jerry Dias, Unifor National President who started his career at the plant. “This situation was caused by Bombardier when they committed to not sell the Dash 8 program then proceeded to do just that.”

Bombardier announced plans to sell the Downsview site in May 2018 and in its deliberations with the federal and provincial governments, Bombardier made clear commitments to maintain jobs.

The contract and commitments between Unifor and Bombardier were immediately violated when Bombardier sold the Dash 8 program to Longview Aviation Capital controlled by Thomson family heiress Sherry Brydson.

“We now have the unfortunate situation where we have a tentative agreement with Bombardier and a strike at De Havilland,” added Dias. “This strike is about Longview’s determination that if they revive the Dash 8 program, and we know they will, Longview will likely do so in Calgary. We cannot allow hundreds of highly-skilled aerospace workers in Ontario who built these aircraft for generations to be left behind.”

Unifor has met with federal ministers and the various provincial government officials including to the Premier to secure governmental cooperation that ensures the commitments made to maintain jobs related to the sale of the Downsview lands are adhered to.

“No one, not even a billionaire heiress from the Thompson family, has the right to violate the commitments made to Downsview workers,” added Dias.

This labour dispute will continue until a fair settlement is reached.