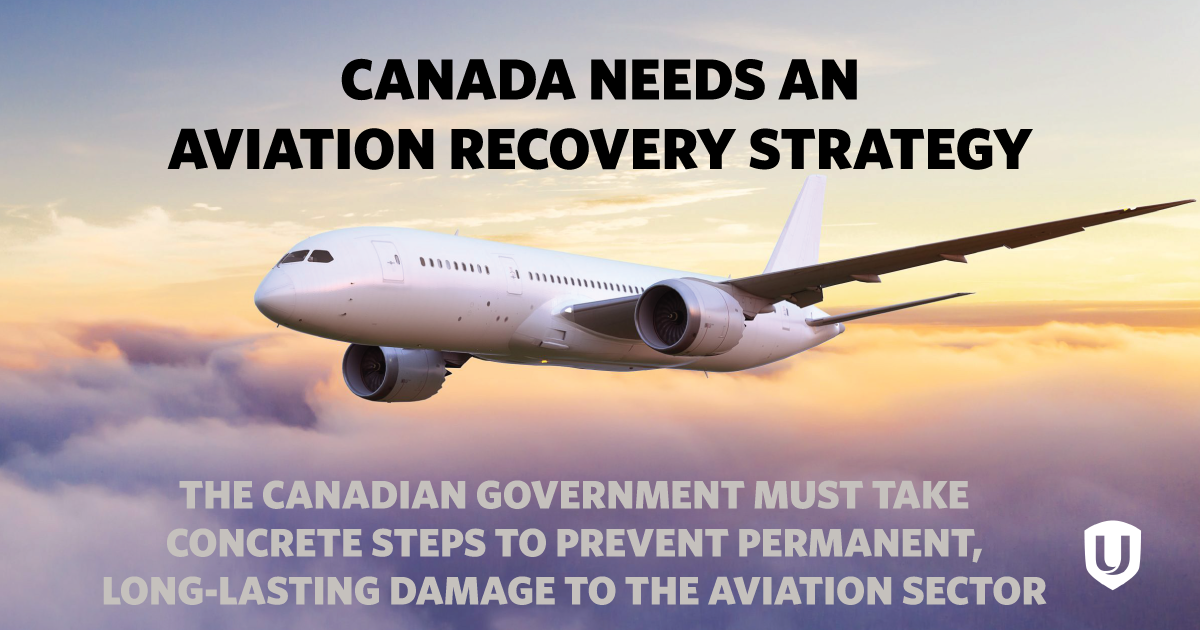 OTTAWA – Unifor, ACPA, ALPA and CALDA continue to call on the federal government to make a direct and meaningful financial contribution to our devastated industry, commensurate with the contribution made by other countries to their own sector.

While the unions were initially encouraged by the Minister of Transport’s public commitment on November 8, 2020 to work with airlines on developing and finalizing an aid package, and a subsequent acknowledgement from the Finance Minister in the Fall Economic Update, airline workers are concerned that, now entering our 10th week, no indication has been given that aid is forthcoming.

Given this lack of aid, it was disturbing to learn that other state-sponsored international airlines were able to avail themselves of both governmental aid in their home jurisdiction as well as the Canada Emergency Wage Subsidy (CEWS) for their Canadian-based employees.

While the extended CEWS program – an employer-directed program – has provided some measure of job protection for Canadian airline workers, we have seen thousands of layoffs in this sector and a disproportionately large number of furloughed aviation workers, notwithstanding the CEWS. The harsh reality is that airlines are extremely capital-intensive operations with a high cash-burn rate and the requirement to preserve liquidity to maintain equipment, routes, and staff. This reality is not considered under the CEWS, and it is a clear indication that more federal government support is required.

"While the government’s move to support foreign carriers may technically fall within the rules of the CEWs program, it represents an additional blow to the domestic carriers and the entire aviation industry," said Jerry Dias, Unifor National President. "It should be a very clear matter of public policy that Canada should place the needs of our country and our airlines first. That this has not occurred is made worse by the fact that many of these foreign carriers have already received direct bailouts from the governments of their respective countries.”

“Canada’s airlines are a critical element of Canada’s infrastructure, including essential travel and transport of COVID-19 vaccines and other critical items such as PPE. Asking Canada’s airlines and airline workers to keep this vital infrastructure operational during this current crisis period without significant federal support is untenable,” said Rob Giguere, CEO, ACPA. “On behalf of thousands of airline workers across the country, we urge the incoming Minister of Transport and the airlines to do whatever it takes to come to a deal so they can support Canadian aviation workers in the same way other countries have done.”

Canada’s airlines have been dealt terrible blows before – including 9/11 and SARS. The current pandemic is worse than all past crises combined, and it will take the support of our government to ensure our sector survives in some form. Make no mistake: Canada’s airlines – and the livelihoods of the thousands of Canadians they employ – remain at great risk if urgent assistance is not forthcoming.

“The federal government acknowledges that Canadian air travel is essential, but instead of helping Canada’s airlines, our legislators continue to miss the mark as a result of failing to properly consult with aviation industry stakeholders and labour associations, such as ALPA Canada, ACPA, and Unifor, and have all but ignored the many well-articulated and science-based recommendations provided to them,” said Tim Perry, President, ALPA Canada.

Airline workers are not part of the negotiations that are apparently taking place between airlines and the federal government, but we are past time for a resolution on this issue. In negotiations, government must ensure benefits are set to flow to workers, protecting current and future employment. We have other jurisdictions already moving to a second round of aid for their airline sector, while Canada has not managed to deliver.

“Our government and airline leaders need to make a deal,” said Russ Williams, President of the Canadian Airline Dispatcher Association. “The longer it takes, the more our workers are paying the price – as every day more routes are cancelled, more jobs lost, and any potential future recovery looks to be years away.”