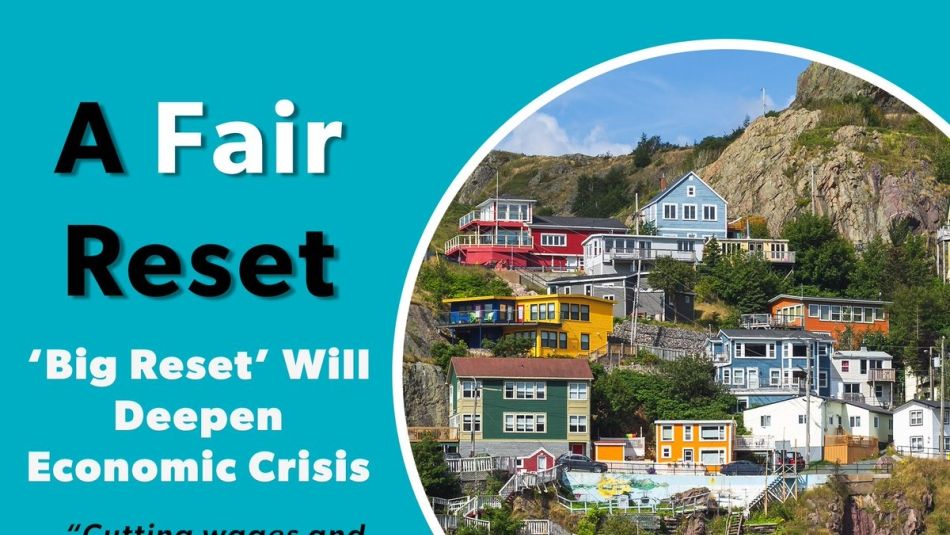 While Premier Andrew Furey is contemplating cutting wages and regressing working conditions for people across the province, as recommended by Moya Greene in her Premier’s Economic Recovery Team (PERT) ‘Big Reset’ Report,  governments and advisors the world over are talking about building back better with inclusive growth policies that ensure no one gets left behind.

We’ve already heard that, if implemented, the recommendations in the PERT report will result in the loss of at least 9,000 jobs, will cut 35% of the health care budget by the end of year six and that any new tech introduced to replace humans in the health care sector is unlikely to pick up the slack.

The ‘Big Reset’ recommendations will reduce wages for public sector workers and result in increased inequality by way of pushing more people into low wage work. The recommendation to review all public sector union contracts and compensation will also further diminish the strength workers have when they negotiate collectively through a union in both the public and private sectors.

The policies put forward in the PERT report fly in the face of the emerging consensus that the world must recover from this crisis by doing better for people and the planet.

Inclusive growth is economic growth that is sustainable and equitable; spreading the benefits of economic growth more evenly across all actors in an economy. Policies can include public investment in infrastructure and care, policies to raise wages and strengthen working conditions, and guide private investment away from undesirable activities.

In October of last year, the International Monetary Fund (IMF) released a report highlighting the value of public investment in programs, such as health care, stating they can actually speed up economic recovery. The researchers found an investment in public programs equal to 1% of Gross Domestic Product (GDP) increases economic activity by 2.7%.  Further, private investment increases by 10% and jobs increase by 1.2%.

The Bank of Canada is talking about inclusive growth, too. In her last speech as Senior Deputy Governor, Carolyn Wilkins stated:

“Canada needs to focus on creating sustainable growth that leaves fewer people behind in order to make higher levels of debt more manageable.”

Let that sink in - creating higher quality employment and stronger public services will grow the economy and make higher levels of debt more manageable. Downward pressure on these outcomes will make the debt more daunting.

The Organization for Economic Cooperation and Development (OECD), the Biden Administration, and even most federal political parties in Canada, are finally recognizing what many have known for years – inequality is a drag on economic growth and actually holds us all back.

We’ve learned through experience in other jurisdictions that cutting wages and public services to deal with debt and deficits can actually deepen an economic crisis.

Massive cuts can create an unemployment crisis that further erodes a government’s ability to pay by reducing the tax base and increasing the need for services – it’s a downward spiral that drags more and more people into poverty or insecurity or both.

How did the PERT get it so wrong?

Newfoundland and Labrador already has the highest rate of unemployment in the country. 25% of workers in the province work for the minimum wage and a full 30% earn below $15 an hour. The province is one of the most unequal in the country. The share of income brought home by the top 10% of income earners has steadily grown over the last 20 years while the share brought home by the bottom 10% has declined.

These trends and inequality gaps will only worsen if the PERT recommendations are adopted.

Instead, the government should focus on creating inclusive growth that, as Carolyn Wilkins so aptly explains, creates a positive reinforcing cycle making higher levels of debt more manageable.

Creating inclusive growth in Newfoundland and Labrador would certainly require a reset – but one that reorients the economy toward fairness and resilience so that more people can weather the storms of economic volatility as they come. (Side note: reducing income inequality also reduces economic volatility – another result of the positive reinforcement loop).

For a start, Premier Furey should raise the minimum wage to at least $15 an hour and ensure it keeps up with cost of living over time. The premier should also implement policies to require fair scheduling practices to increase full-time employment and reduce the number of people who have to rely on multiple jobs to make ends meet.

Workers employed in the broader public service including child care, long-term care, education, and health care should be paid a living wage, be subject to fair scheduling practices and receive strong health benefits. If government doesn’t do this, the premier will be creating the instability and insecurity he is purporting to try to avoid.

Workers deserve a just transition no matter the reason for displacement. There are so many transitions taking place at the moment, including COVID-19 related restructuring, technological change, and the move to a green energy industry.

These are all policies I have mentioned before and they are just the beginning in creating a fair, inclusive and resilient economy that spreads the benefits of economic activity fairly across all people.

There is no doubt that the people of Newfoundland and Labrador are resilient. But implementing the recommendations in the PERT report will create unnecessary suffering and make the crisis worse. Instead, Furey should focus on building a fairer economy for all.

For more information on inclusive growth and an economy built for all visit: