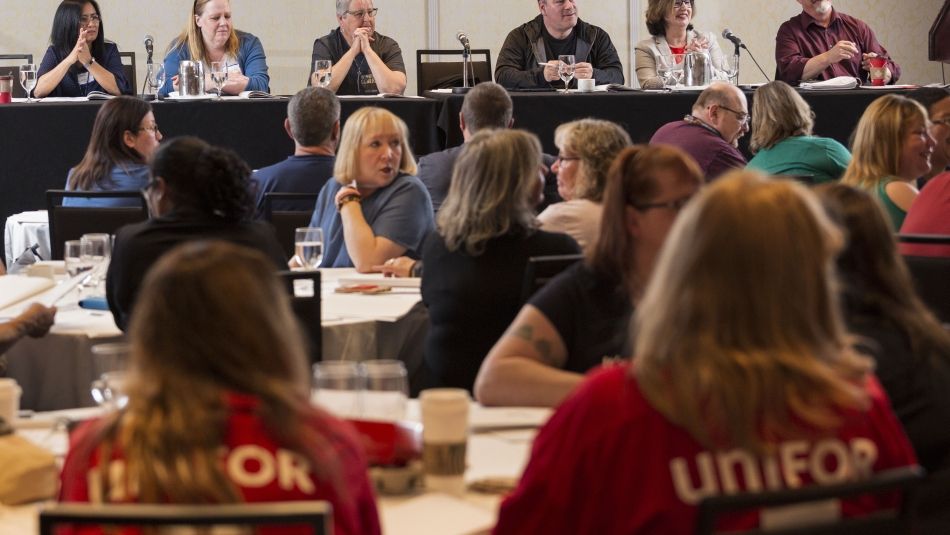 Delegates to Unifor’s Prairie Regional Council in Winnipeg drew inspiration from the city’s infamous 1919 general strike as they vowed to build a broad coalition to push back against conservative politicians federally and provincially.

“Everything we have been doing for five and a half years has been in preparation for this campaign,” said Unifor National President Jerry Dias in a speech to 260 delegates and staff.

With a federal election planned for the fall, a provincial election expected in Manitoba and a newly elected right-wing government in Alberta, Dias said it is vital that workers stand in solidarity with other progressive groups to push back against attacks on working people.

One hundred years ago workers in Winnipeg stood together in a broad coalition of union and non-union workers, women’s groups, immigrants, skilled and unskilled in a way that had rarely been seen before, and changed the country. It will be the same recipe for success in 2019, Dias said.

“An eight-hour day. A living wage. Union recognition. These were the demands of the Winnipeg general strike, and today we need to fight to advance these goals,” he said.

Western Regional Director Joie Warnock told delegates they are on the front line of the fight against the right, with conservative governments in every Prairie province determined to roll back worker rights and sell off Crown corporations.

“We’ve had enough. We’re not going to take it anymore. We’re fighting back and we’re going to win,” she said.

On the closing day of the Council, outgoing National Secretary-Treasurer Bob Orr thanked delegates for their dedication and making a real difference for workers. “It’s your hard work that makes Unifor great, and the powerhouse in Canadian politics that it has become.”

Former Unifor Senior Economist Jim Stanford spoke about the future of Canada’s energy industry and shared his analysis of the popular “Green New Deal”. He said the key to an energy sector that works for Canadians is gradual diversification and making sure that no worker’s family is left behind as it transitions away from fossil fuel sources.

Manitoba NDP Leader Wab Kinew said he is inspired by the general strikers because they put everything on the line, including their lives, to fight for their rights and a decent standard of living for their families.

“The best way to celebrate the 100th anniversary of the Winnipeg General Strike is to defeat Brian Pallister as Premier of Manitoba,” said Kinew, pledging to bring back card check for union certification, a higher minimum age, and a crack down on unsafe workplaces.

“I want to get tough on corporate criminals. When Mom and Dad go to work, they should come home alive and safe.”

There were two panel discussions at the council examining the importance of class unionism to build  broad coalitions, and another looking at lessons from the Winnipeg General Strike. “We need to come together as we did 100 years ago,” said Gina McKay, labour director for the Winnipeg United Way. “That’s how we build a stronger movement.”

Unifor Member Mobilization and Political Action Director Josh Coles said Unifor is ready to go as soon as an election is called in Manitoba, and planning for the union’s campaign for the federal election in the fall is already underway.