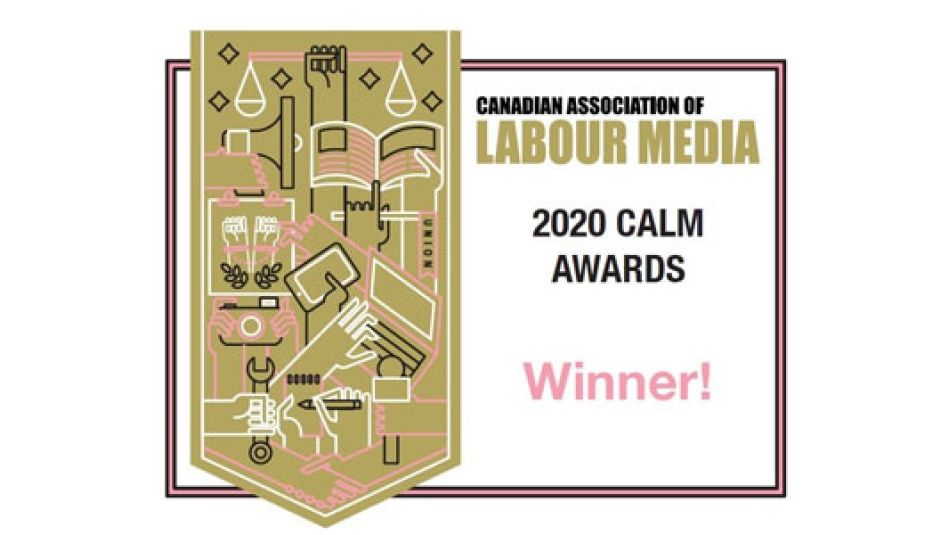 Unifor’s campaign to stop Doug Ford’s cuts won the Freeperson Award for best cartoon, illustration or infographic for the newspaper ad entitled "Autism - See the pain behind the cuts."

“The messaging is strong and powerful. There is no room for interpretation. The letters are as bold of a statement as the person leading the cuts. You feel the pain just by looking at the image… It also gives the impression that as a union, they will not stand by this and are committing to action,“ wrote judges in an online awards ceremony.

A Unifor video about the history of activism in the auto sector won the Cliff Scotton Prize for narrative video, audio or visual that reflects history, traditions and culture of the labour movement.

“Unifor’s video travels through time, across sectors and borders to connect autoworkers to their proud history,” said the judges in an online post.

A video that premiered at our Quebec City Convention about the many fight backs the union took on in 2019 won for best narrative video, or video series documentary.

“Unifor’s National Solidarity Video does a fantastic job of highlighting the various recent struggles, causes and campaigns Unifor has been involved with. The high quality imagery cut together with soaring, inspirational music creates a feeling of hope, promise and solidarity: exactly the feelings that any union should hope to convey,” said the judges.

Unifor.org also won for best website content after judges called the site easy to navigate and “clear on its purpose while maintaining a good balance between negative and positive space.”

And Unifor’s campaign to save jobs in Oshawa won the Dennis McGann Stroke of Genius Award. “When GM announced it was closing its Oshawa plant after 100 years of operation, Unifor’s response matched the scale the situation demanded. Inviting Sting to Oshawa was a gesture, both grand and intimate. The union demonstrated its ability to create a strong emotional and political narrative in the media, as well as a sense of community and belonging for workers,” said the CALM judges.

Best campaign went to Unifor Local 1S in Saskatchewan for “Hold the line 2.0” which was a daily newsletter to keep locked out workers engaged and informed during the dispute with several Sask Crowns in 2019.

In Regina Unifor Local 594 won for best use of social media during their six month lockout at the Co-op Refinery.

The Katie FitzRandolph Award for best overall regular print publication went to Local 1285 for their newsletter.

CALM brings together more than 200 labour unions across Canada to strategize and better communicate with members, campaigns and issues.

Local unions of all sizes benefit from CALM membership through resources, education, training and support. For more information about membership, or to join, click here.