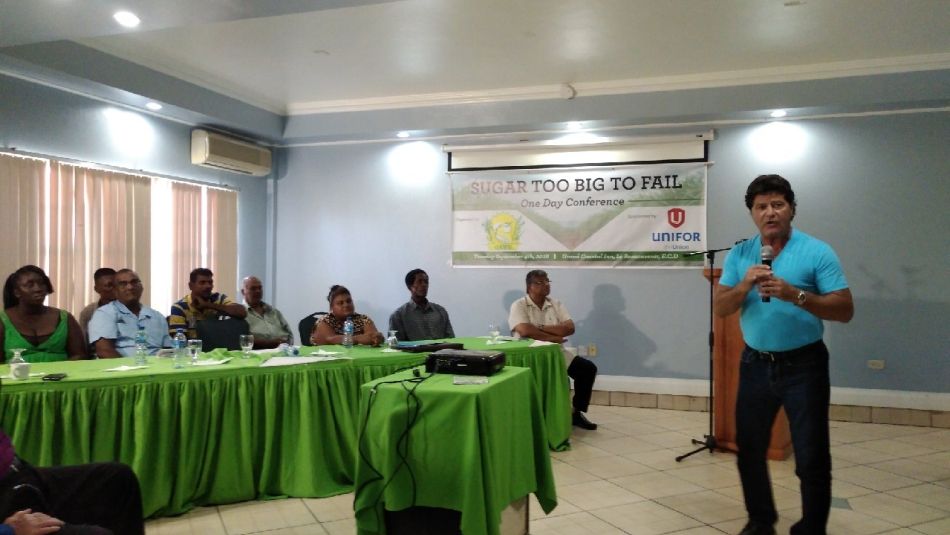 Unifor is proud to sponsor the Guyana Agricultural & General Workers Union (GAWU) "Sugar Too Big to Fail" Conference. The conference, held in Le Ressouvenir, East Coast Demerar on September 4, 2018, examined the challenges faced by sugar workers and the sustainability and viability of the Guyana Sugar Corporation Inc., the country’s single largest employer.

"We are here to renew generations of solidarity between Guyanese and Canadian workers and a long and productive bond between our two unions," Unifor National President Jerry Dias told delegates.

Sugar workers shared their concerns about job loss if plans to privatize the industry proceed. It's estimated that 10 per cent of the Guyanese population is directly supported by the sugar sector.

“I know that it is a reality that you are dealing with, and thousands of sugar workers have already been affected.  Those who take you down this road must be accountable - accountable for the business decisions that will redistribute the revenues from public assets to private interests, said Dias. “From our experience, what is truly important is that worker rights are protected and that the consequences of restructuring are negotiated with your union.”

The Unifor Social Justice Fund announced a $44,000 contribution to launch a program to train 120 community coordinators in six sugar estates to further the discussion on the future of the country’s sugar sector. The coordinators will also work to increase community involvement and workers participation in the restructuring process and to improve conditions for agriculture workers.