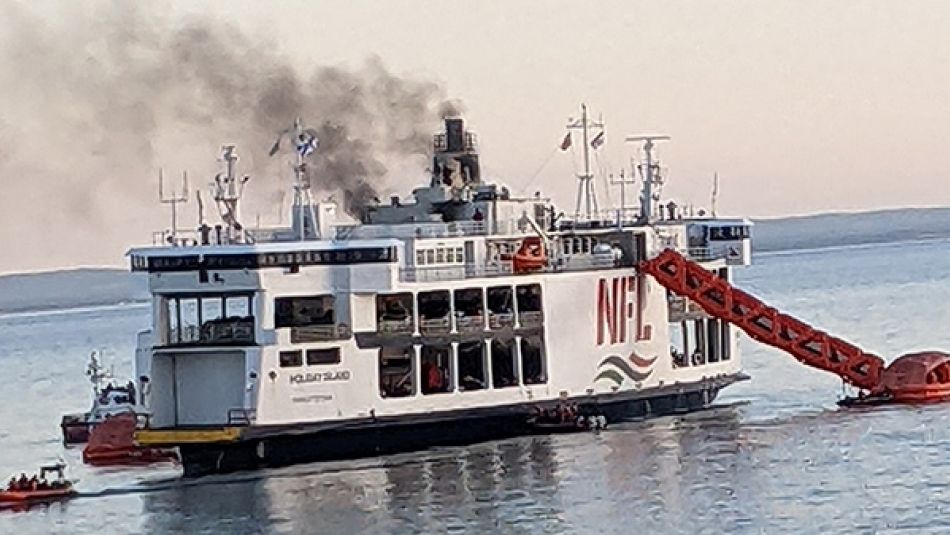 WOOD ISLANDS, PEI - Unifor members on board the MV Holiday Island executed emergency procedures quickly and with great care, ensuring the safe evacuation of all 183 ferry passengers and their pets and 22 crew after a fire broke out in the vessel’s engine room on Friday, July 22, 2022.

After a meeting between Unifor leadership and the leaders of Locals 4508 and 4508A Monday evening, it is clear that if it were not for the actions of Unifor members, especially those in the engine room who first responded to the fire, the outcome could have been very different.

“On behalf of our union, I want to thank our members for their commitment to safety and for the bravery it took to face a very dangerous emergency with such dedication and care,” said Lana Payne, Unifor National Secretary-Treasurer. “Anyone who makes a living on the sea knows every day can be a new challenge. This fire could have been deadly had crew not responded as they did. They are heroes.”

Local 4508 President Gail Heighton was not scheduled to work that day but described the events as deeply stressful for every Northumberland Ferries Limited worker and their families.

“We’re grateful everyone got off the vessel safely and without injury. That is every member’s top priority,” said Heighton. “We’re now processing the intensity of emotions that hit you after a situation like this, including a deep sense of loss – that boat was a second home to many of us, some who have made these crossings for 20-plus years.”

Heighton reached out personally to every member who was aboard the vessel that day to offer union supports and an opportunity to talk to someone about their experiences.

“The fire drills we do twice a week, every week, saved lives,” said Heighton. “On Friday, when the fire started, the training kicked in and every crew member, from the engineers to the cafeteria workers, knew exactly what to do.”

Will Rafuse, an electrician and District Chair for the Licensed group in Local 4508A, described the intense moments experienced by the engine room crew after signs of fire were first noticed.

“It’s somewhat surreal to process what happened,” said Rafuse. “Our members take a great deal of pride in their work and we are grateful all got out safely. They took the right steps without anyone getting hurt. It’s incredible, really. They were brave and they did an exemplary job.”

Following such an incident, the union is particularly aware of the need for mental health supports and creating space for those involved to process the events.

“It is our expectation that the employer has counsellors in place to provide the required assistance to our members and provide any time away from the work environment to those employees who have had to work through such a terrifying situation,” said Linda

MacNeil, Atlantic Regional Director. “The fact that every passenger young and old, including those with mobility issues, and every crew member made it off a burning vessel is due to the heroic efforts of the MV Holiday Island crew. They deserve the supports and accommodations to recover.”