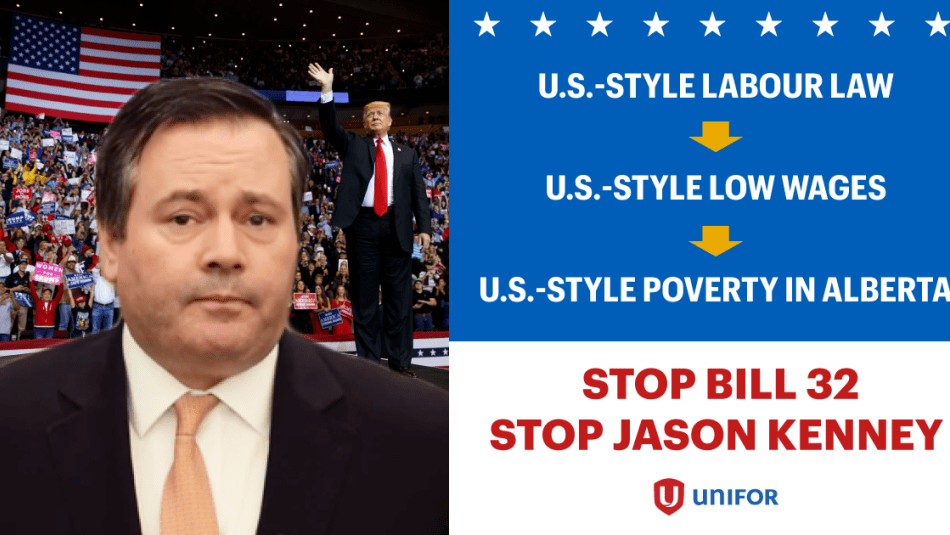 Jason Kenney’s Trump-style attacks on worker’s rights has sent shockwaves across the country, as workers across Canada’s various sectors and regions worry about the run-off effects.

On Thursday, July 16, Unifor’s National Executive Board unanimously passed a resolution to organize in opposition to bill 32 and to any attack on workers’ rights in Alberta. The full text of the motion is at the end of this article.

At concurrent meetings on July 20, local union leaders from across the province met online to discuss the worst impacts of the proposed legislation, and plan for how Alberta’s workers will directly oppose the law.

On Thursday, July 23, members from across Alberta can participate in an activist seminar about building an opposition to Kenney’s attacks, and defending workers’ rights. All members in Alberta are invited to sign up.

“Kenney’s trying to silence the collective voices of Alberta’s workers, voters, but we will not go quietly. I heard that message loud and clear- Unifor members in Alberta will not stand for this draconian attack on their rights, and theft of their collective power,” said Gavin McGarrigle, Unifor western Regional Director.

Bill 32 includes changes to law that would:

Attacks on unions like this are unheard of in Canada. Where laws like this are implemented in Southern U.S. states, workers see wages that are kept artificially low. For more information on Bill 32, visit Unifor’s campaign page to Stop Bill 32: Defend Workers’ rights in Alberta.

Unifor National Secretary-Treasurer Lana Payne participated in Monday’s organizing meeting, sharing a cogent message about the campaign’s direction, “This is an attack on the very core purpose of unions, to stand up for the rights of working people. Every MLA in the province must hear that workers will not abide by this  attack on their rights. Unifor’s 315,000 members have your back, but it’s up to Alberta’s workers to unite to stop Bill 32 and oppose Bill 1.”

Read the full text of the motion below, and take action today to call your MLA and oppose this bill.

Motion of the National Executive Board:  Defending Workers’ Rights in Alberta