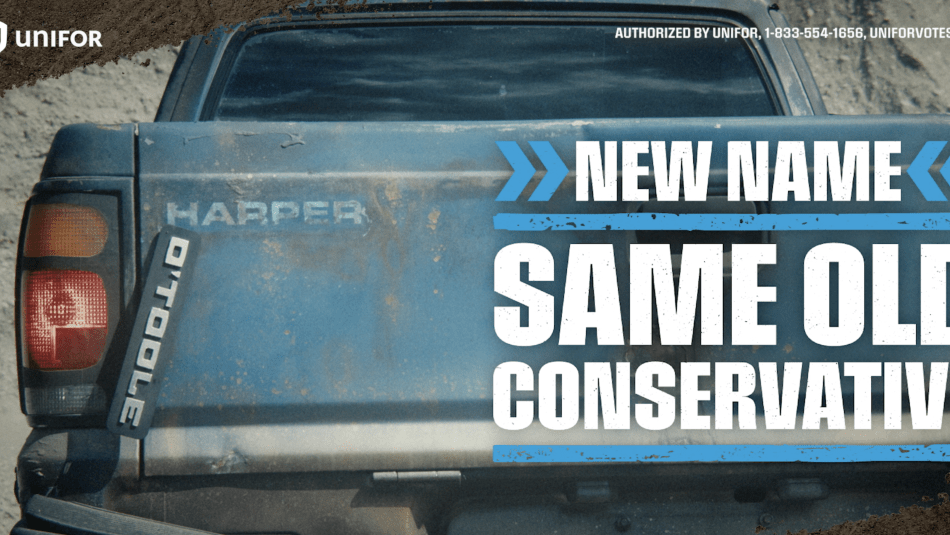 “Canadian voters won’t be fooled by a new name on the bumper. We know exactly where Conservative policies will take us – more cuts and more money to big corporations, while working Canadians are left behind,” said Jerry Dias, Unifor National President. “The next federal election is too important, and we cannot let the conservatives take Canada in the wrong direction.”

The new television ad premieres today and is only the first step in Unifor’s plans for an anticipated 2021 federal election, will run on major networks in the coming weeks, and can be viewed at 2021otoole.ca and on the union’s Facebook page.

“O’Toole can’t even control members of his own party while they move to attack abortion access and LGBTQ rights. We cannot trust him to lead, and we’re ready to take on this fight,” continued Dias. “Unifor, like all unions, has a constitutional right to participate in elections and a responsibility to defend members’ interests whenever Canadians go to the polls.”

The ad campaign is one pillar of the union’s plans for the federal election, which will include TV and social media advertising, engaging with members about election issues, and targeted get-out-the-vote campaigns in key ridings where members make up a substantial portion of the electorate.

In the 2019 federal election, Unifor member organizers had conversations with more than 100,000 members, and the Conservatives were defeated in 72 per cent of the 69 ridings the union targeted.

For media inquiries or to arrange interviews please contact Unifor’s Director of Communications, Natalie Clancy at  Natalie.Clancy@unifor.org or 416-707-5794 (cell).