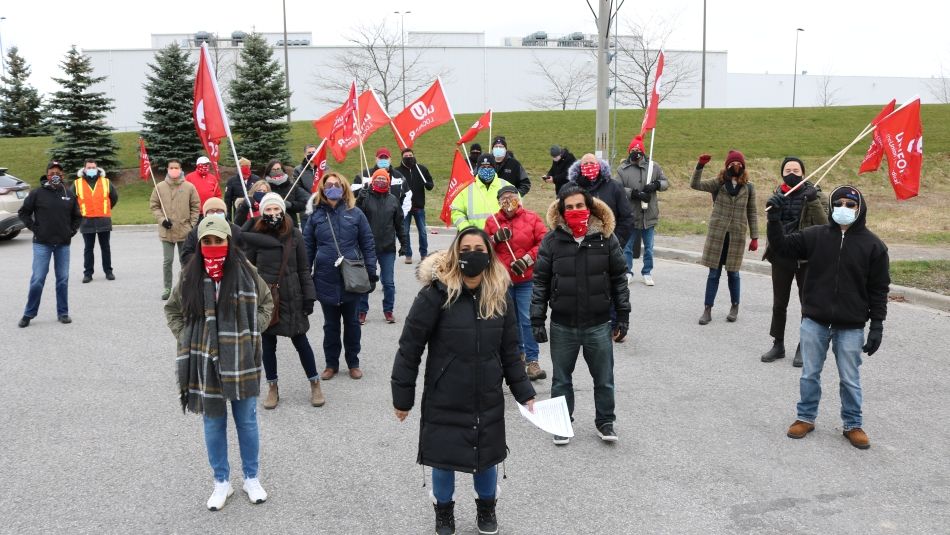 “Loblaw Co. and its Chair Galen Weston sent the message that they feel they can ignore and disrespect a small group of workers from Newfoundland, so today Unifor is expanding secondary picket action to send a clear message back,” said Unifor National President Jerry Dias.

“These frontline workers are fighting a company that makes a billion dollars a year, owned by one of Canada’s wealthiest families, for a living wage,” Unifor Ontario Regional Director Naureen Rizvi told picketers in Ajax. “Canadians’ need to hold our largest, richest corporations to account if they aren’t willing to provide a decent living to their workers.”

“Loblaw is using every tool at its disposal to try to force these workers to yield their fight for fair pay,” said Unifor Atlantic Director Linda MacNeil outside the Moncton Loblaw distribution centre. “If the company wants to settle this, if they truly want to return service to its customers across Newfoundland, then they need to come back to the negotiating table with an improved offer.”

During a news conference livestreamed from Ajax, Moncton and St. John’s on fb.com/UniforCanada, Carolyn Wrice, President of Unifor Local 597, thanked the picketers for standing in solidarity with the striking workers.

“People across the country need to know that something is wrong when workers work full-time hours for Loblaw Co. but can’t afford to buy the groceries they stock,” said Wrice.

Unifor is calling for the company to return to the bargaining table with the newly appointed provincial mediator Wayne Fowler.

“Loblaw Co. may be the largest retail company in the country but Unifor is the largest private sector union so this company needs to understand that this is bargaining not dictating,” said Dias.