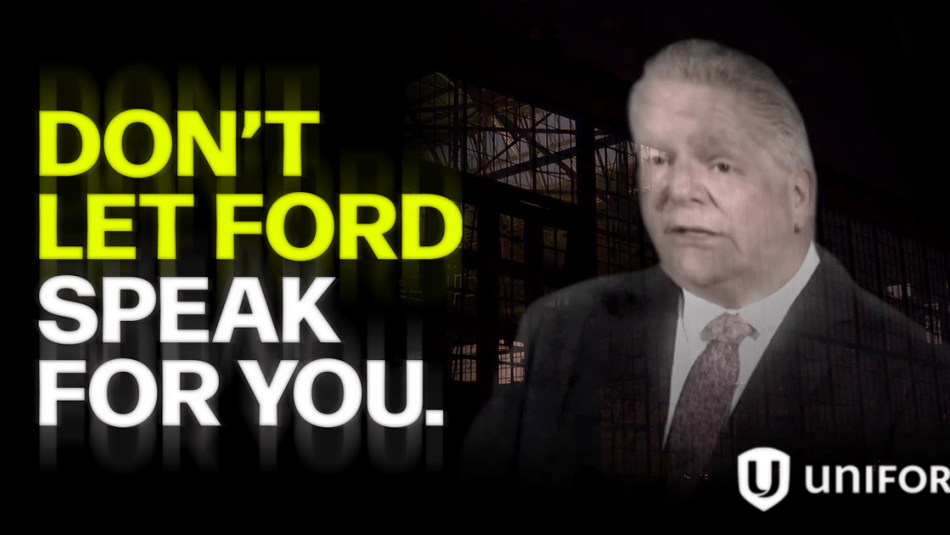 TORONTO – Unifor launched a comprehensive campaign to show members the damage of Doug Ford’s government and empower workers to vote for a better Ontario.

“We’re asking members, and all voters, not to let Doug Ford speak for them in this election,” said Unifor Ontario Regional Director Naureen Rizvi. “Time and time again, Ford and his conservatives have let workers down. In this election, we’re not going to fall for his projection of a worker-friendly image.”

Members identified the many ways that Ford failed them in conversations with organizers in target ridings over the past year. Affordability, our crumbling public health care system, and workers’ rights were at the top of voters’ priorities each time.

“Every voter depends on our public health care system to be there when we need it, and Ford not only underfunded the system and stalled on fixing long-term care, but he went even further by steamrolling health care workers’ rights and wages with Bill 124,” continued Rizvi.

“For us, this election is a labour dispute on behalf of every health care worker who cannot strike and thanks to Doug Ford, cannot even negotiate for a fair contract. He didn’t want to respect their rights, so now we need to revoke his government’s slim majority.”

Unifor’s member organizers are speaking directly to union members in ridings across the province, on the phones and on the doorstep, with the goal of connecting with more than 40,000 workers in the next four weeks.

The union encourages all members to vote, and volunteer in their ridings in this election. Members should visit uniforvotes.ca to make their plan to vote and sign up to volunteer.

The union’s Third-Party Advertising also launched this morning, with a new ad highlighting Ford’s false image. Watch and share the video at fordfailedus.ca.

To arrange interviews including via Skype, FaceTime or Zoom contact Sarah McCue, Unifor National Communications Representative at 416-458-3307 (cell) or @email.