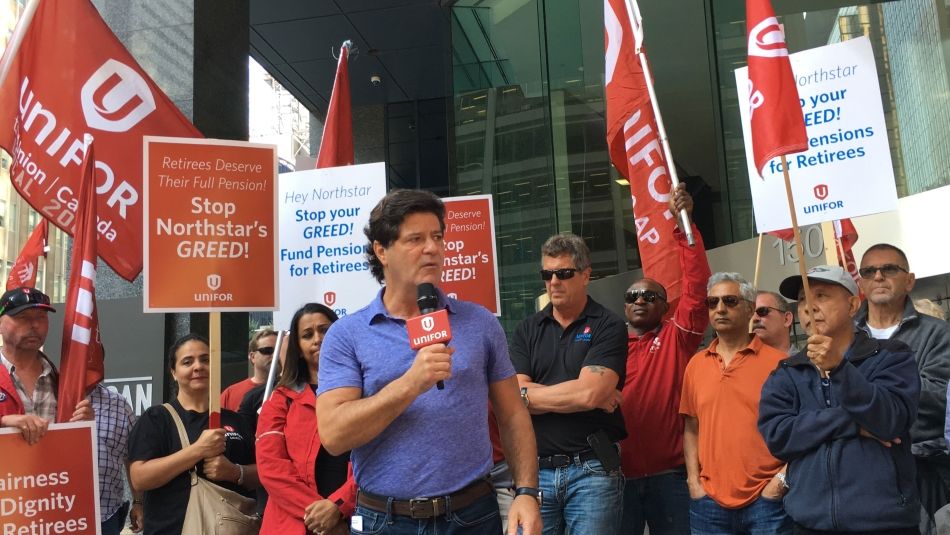 TORONTO – More than 100 Unifor members held a street occupation and rally in front of the Wynnchurch Capital Canada office in the heart of Toronto’s financial district to demand the private equity firm fund the pension deficit for Northstar retirees.

“As the private equity owners of Northstar Aerospace, Wynnchurch Capital can do the right thing and show workers the respect that they deserve by funding the pension plan,” said Unifor National President Jerry Dias. “Workers made Northstar profitable and it’s about time corporations pay a fair share to retirees.”

The Unifor National President, members and retirees held today’s action to seek an immediate response from Wynnchurch Capital, the private equity firm that owns Northstar. Targeting Wynnchurch comes after Unifor held a three-day occupation back in August. The union is concerned that Northstar Aerospace is closing its Milton plant at the end of September and with

the closure there will be a 24 per cent pension cut that the profitable company refuses to fund.

Retirees and members of the Northstar Milton plant are represented by Unifor Local 112. On hand to speak with the crowd were retirees, the President of Local 112 and Unifor’s Ontario Regional Director Naureen Rizvi. “We are here to send a loud message against corporate greed. Funding the pension shortfall is an insignificant amount for Northstar, but it means a decent living standard for retirees,” said Rizvi.

During the rally retirees spoke about the drastic impact the pension reduction will have on their lives and living standards. The average Northstar retiree is 70 years old and currently receives $881 as a monthly pension. When the plant closes, the cut will mean a reduction of $211 each month. To date, the company has offered no response to the union’s single demand – to fund the pension deficit.

Dias said, “After months the company has refused to discuss the matter. Time is running out and Wynnchurch might want to hide up in a tower, and Northstar might want to run but they will not be able to hide. Unifor will take action wherever we need to and ensure that retirees get what they deserve.”

Unifor is Canada’s largest union in the private sector, representing more than 315,000 workers in every major area of the economy. The union advocates for all working people and their rights, fights for equality and social justice in Canada and abroad, and strives to create progressive change for a better future. For more information read this leaflet.

For more information or to arrange an interview please contact Denise Hammond, Director of Communications at @email or (416)707-5794.