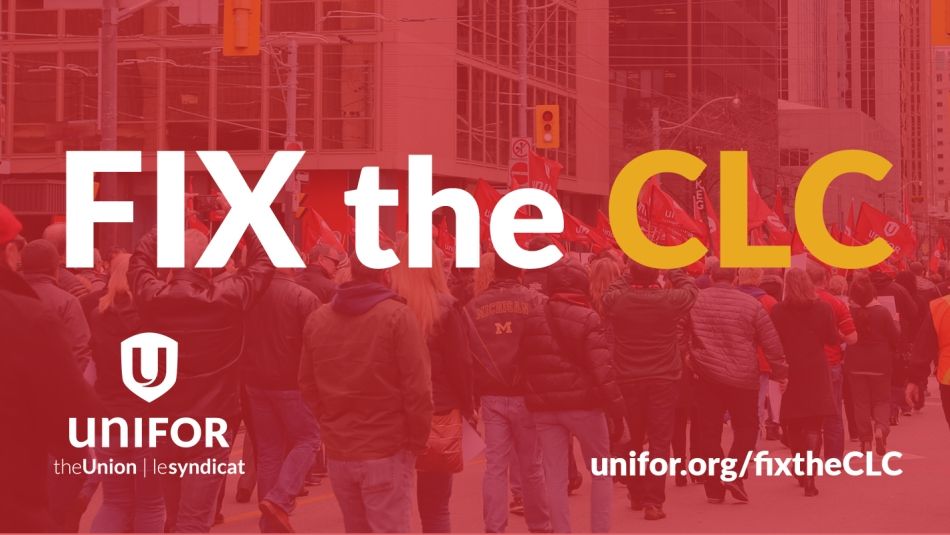 The following information is a quick guide to help Unifor members better understand why the union has made a decision to disaffiliate from the Canadian Labour Congress (CLC). It is important to note that this decision was to remove Unifor as an affiliate from the CLC, it is not about removing the active participation in Canada’s labour movement.

1) Why did Unifor leave the CLC?

This dispute is about the ineffectiveness of the CLC and its failure to prevent attacks on workers from their U.S. - based unions. The CLC lacks an effective mechanism for workers to change affiliations and it is a broad problem that has plagued the labour movement and requires urgent change.

This difficult decision was made after a year of working with the CLC trying to resolve Unifor’s concerns about U.S.-based unions trampling on the rights of workers, including their democratic right to choose their own representation or to express dissent about the union. The CLC failed to act to address the aggressive and undemocratic tactics shown by U.S.-based unions, against the wishes of members in Canada.

2) What do we say to people who still do not understand why Unifor left CLC?

When Unifor was founded we committed to improve and build the labour movement. That is why Unifor took a stand for union democracy and the rights of workers. Our union is opposed to any union that threatens, harasses, intimidates, or silences workers for simply asserting their democratic rights to choose a union or for the purpose of quelling dissent. It is our hope that the action to disaffiliate from the CLC will trigger change to ensure that workers in Canada have their democratic rights respected.

3) What needs to happen to fix the CLC?

Change never happens without challenge. Unifor’s leadership believes strongly that in order to make things better for workers there is a need to advance this issue now, and by doing this Unifor’s leadership hopes that there will be a stronger labour movement in Canada.

The CLC must establish a solution that will create a fair process to allow Canadian workers to change their union affiliation, including leaving undemocratic U.S.-based unions, and to prevent, bullying and intimidation of workers should they choose to leave. While Article 4 of the CLC Constitution outlines a democratic process for workers to change unions, it is not enforced, which means it is not working for workers.

We must fix that. unifor.org/fixtheclc

4) Did the decision to leave the CLC violate Unifor’s Constitution?

No. Unifor’s Constitution makes it clear the National Executive Board (NEB) has authority to make decisions in between councils and conventions. The NEB is empowered to make decisions on behalf of the union as set out in the Constitution and it acted in keeping with Unifor’s governance. This unanimous decision is subject to final review and approval by delegates at the Canadian Council and the next council, held yearly, is scheduled for August 17-19, 2018 in Halifax.

5) Why is Unifor encouraging locals to continue to be active in federations, local labour councils and other activities?

Unifor is proud to defend the rights of working people and unions and we will continue to encourage all locals and members to participate in and support our collective campaign work with federations and labour councils. Unifor’s issue is with the CLC and not with all of the dedicated rank and file activists across from coast to coast to coast that are involved in creating social change and building workers power.

Unifor is disappointed that the CLC has advised federations and labour councils to remove duly elected Unifor officers and is seeking to prevent our activists from participating in locally based campaign work. While Unifor works to sort out this serious issue with the CLC, the important work we are doing in communities across Canada must continue un-interrupted.
Let’s remember, solidarity is not about paying dues to a central labour body, it is about the work that we do every single day. Our union will continue to be led by principles and act for justice. Unifor will not rely on bureaucracy to determine how trade unionists build a better world.