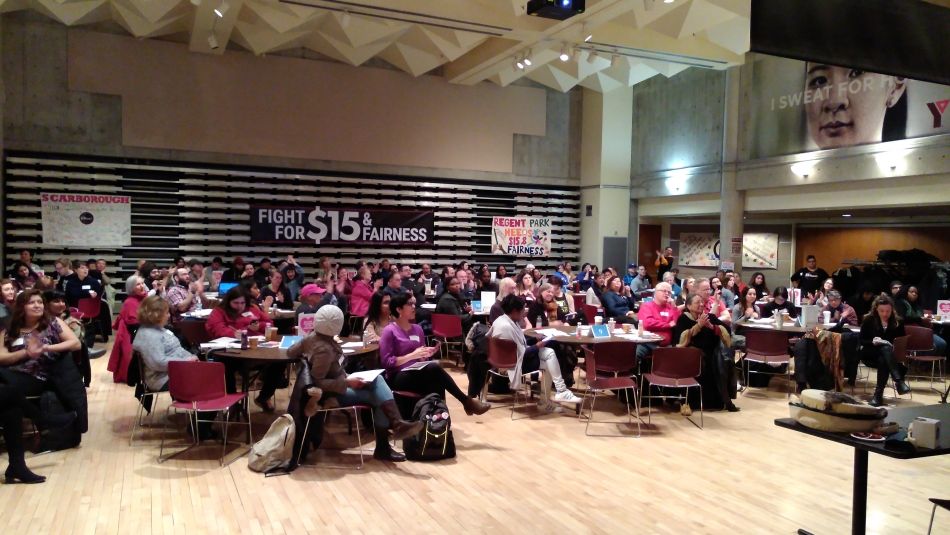 On March 23 and 24, trade unionists, including Unifor members, community activists and allies from across Ontario came together in Toronto to celebrate the gains made by recent labour reform in the province and to discuss what’s next with an Ontario election on the horizon.

Labelled “Keep Fighting for $15 and Fairness”, the provincial strategy meeting organized by the Fight for $15 and Fairness coalition and the Workers Action Centre was an opportunity to look ahead to push for more gains for workers, as well to prepare to resist roll back efforts threatened by Doug Ford’s conservatives.

“Doug Ford is no friend of workers,” said Naureen Rizvi, Ontario Regional Director. “He could open up the legislation and repeal everything that we’ve fought so hard to achieve. This is the time to collectively strategize to defend what we’ve gained and to advance workers’ rights.”

Members of Local 414, which represents workers in the retail sector, among others, and members of the new unit, Local 7575, representing hotel workers, were in attendance and joined hundreds of others to discuss tactics and strategy to maintain momentum for the campaign for decent work and a living wage for all workers.

There were more than 20 breakout sessions and topics ranged from bargaining and organizing under Bill 148, social media and other tactics to fight for decent work, and how to connect the campaign to the electoral organizing which will soon be underway with an Ontario election scheduled for June 7. David Anderson, from Local 7575, led a session entitled How we form unions and why laws matter.

“Strategy meetings like these are incredible opportunities to bring together like minded people who know that defending good jobs, goes hand in hand with so many other issues,” said Rizvi, highlighting Unifor’s Make it Count Ontario election strategy. “If we want to defend good jobs, improve health care and pharmacare, and establish universal, accessible public child care, we need to come together and stop the Conservatives.”