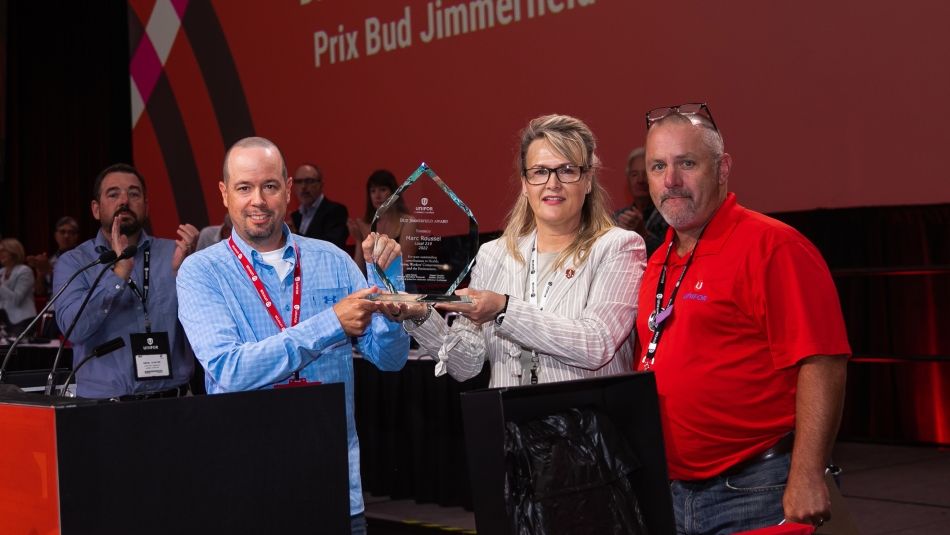 At Unifor’s Constitutional Convention in Toronto on August 10, 2022, Director of Unifor’s Health and Safety department Sari Sairanen presented the 2022 Bud Jimmerfield award to Marc Roussel, a Unifor member who goes above and beyond in their dedication to workplace health and safety.

“Marc has twin daughters, seven years old, and he makes sure he goes home whole at the end of his workday, along with all of his members,” said Sairanen. “And that’s not an easy task. You’re bargaining daily with the employer and even with the regulator in ensuring workers’ rights are met in the workplace.”

In 2019, damaged asbestos was found in two places at Marc’s pulp mill, owned by AV Group. The employer hired a private contractor to remove it, but when the contractor recommended a full enclosure be set up to safely abate the asbestos, the company pushed them to use a less expensive drop-sheet method, which would not prevent the spread of asbestos dust.

Concerned about this, the union called in a Worksafe New Brunswick Health and Safety Officer who inspected, and ordered the employer to use a full enclosure.

The abatement was done under full enclosure, but AV Group still appealed the order to the province’s Chief Compliance Officer who then revoked the order, saying it was invalid because only the contractor was responsible for the safe abatement of the asbestos, and the order was targeted at just the employer. This is an example of how employers will actively avoid taking responsibility for the health and safety of workers.

“I can’t count the number of times I’ve been called into meetings where the employer has tried to intimidate me,” said Roussel.

The Local appealed the Compliance Officer’s ruling and Marc and the Contractor testified at a hearing in November of 2020.

In a scathing response in February 2021, the appeals panel agreed with Marc and the Local.

The chair of the panel, Nathalie Thibeau, said in the response:

“To rely on the fact that the employer hired a contractor in order to shirk that responsibility goes against the very nature of the OHS Act. Surely, that cannot be a correct interpretation.”

The decision also takes into account what kind of message it would have sent to other employers if AV Group had won. This was a huge victory for all workers, at the mill, in New Brunswick, in the Atlantic Region, and for all of Unifor.

“I know I can always count on Local President Brady Moore and the rest of my Local to have my back. And the company now knows this,” said Roussel. “It is only possible to move health and safety forward and take on the company with the membership’s support and solidarity.”

Bud Jimmerfield was a tireless activist who worked as a machinist for 31 years at an auto parts plant in Amherstburg, Ontario. He was diagnosed with esophageal cancer in 1996 and died 18 months later. Before he died, Bud charged union activists with an important responsibility: “Don’t mourn my death, fight for the living and do your best to try to prevent future occupational diseases, death and injuries from occurring.”