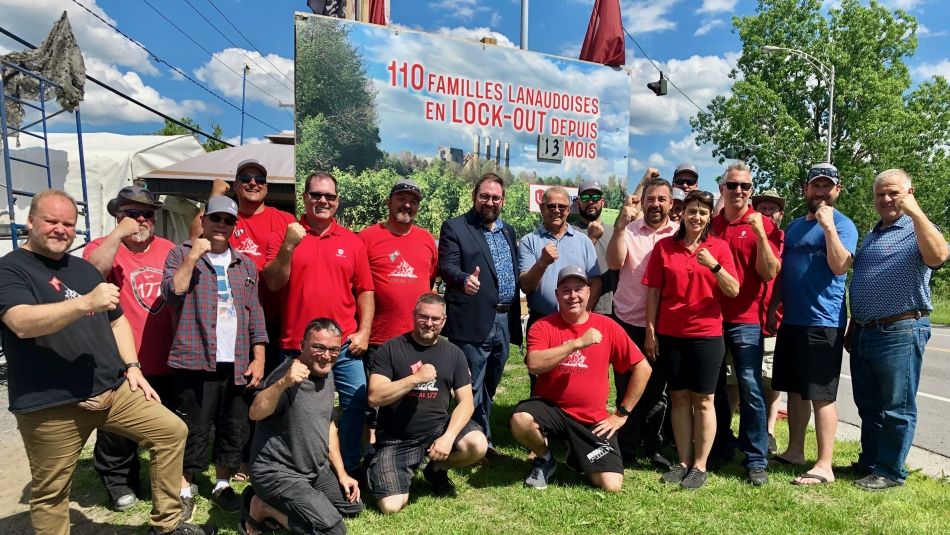 JOLIETTE, QC – Yesterday afternoon, Unifor Quebec Director Daniel Cloutier was present on the picket line alongside locked-out workers of the Ash Grove cement plant, accompanied by Pierre-Luc Bellerose, mayor of Joliette, and André Champagne, mayor of St-Thomas, who came out to show their support for the group.

The Quebec Director denounced the government’s lack of action in this dispute, arguing that through its inaction the government is facilitating the production of “scabbed cement” and setting itself at odds with its own anti-scab legislation by helping to prolong the conflict.

It should be noted that clinker, which requires transformation, accounts for 90% of the raw material in cement. Prior to the conflict, this product was produced by Unifor members, but since July 2021, the company has been importing clinker.

“Based on conservative estimates, we know that since the company began importing clinker, it has managed to produce 500,000 tons of cement, which allows concrete mixers to pour between 2,000 and 4,000 cubic meters of concrete. Not only is this cement currently being produced by scabs in the greater Lanaudière region, but it is being used for various projects in the region, including projects for governments and institutional investors. It makes no sense!” deplored Quebec Director Daniel Cloutier.

The union leader also claimed that this violation of the anti-scab law upsets the balance of power, since Ash Grove would never be able to maintain its current rate of production if it respected the spirit of this legislation.

Mayors Bellerose and Champagne represent two communities that are keenly affected by this conflict. Unifor is eager to work with these municipalities to help bring an end to the dispute, which has dragged on for 14 months now.

“Mayors and municipal councils do not usually interfere in labour disputes, but this has gone on long enough! The impact on our communities is huge, and that’s why my colleague from St. Thomas and I are here today and have offered Unifor our full cooperation. The city will do whatever it can to support the workers. The city of Joliette cannot count on subcontractors to provide a living for our citizens,” said Pierre-Luc Bellerose, mayor of Joliette.

Unifor is the largest private-sector union in Quebec and Canada, with more than 315,000 members in all sectors of the economy. Unifor works on behalf of all workers and their rights. It is also actively engaged in the fight for equality and social justice both at home and abroad, and aspires to ensure a better future by bringing about progressive change. In Quebec, Unifor represents close to 55,000 members and is affiliated with the province’s largest labour federation, the Quebec Federation of Labour (QFL).