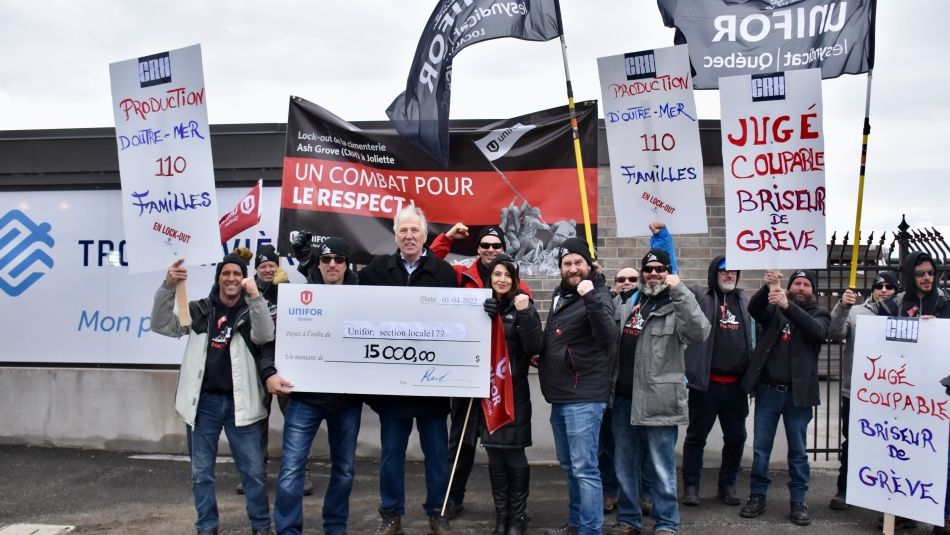 More than 300 members of Unifor and QFL-affiliated unions answered the call by locked-out Unifor Local 177 members at the Ash Grove CRH cement plant to join them in a march at the Port of Trois-Rivières, Quebec on April 1.

“We are here to show support for our members, who have been locked out for more than 10 months. By choosing the Port of Trois-Rivières as the site of our demonstration, we want to denounce the fact that Ash Grove CRH has been importing clinker since the beginning of the lockout. This allows them to continue producing cement despite having put their workers out on the street,” said Unifor Quebec director Renaud Gagné.

Importing clinker from Turkey and Greece amounts to using scab labour, since this material is normally manufactured at the cement plant. In fact, clinker accounts for 90% of the raw material in cement. Prior to the labour dispute, this product was manufactured by heating limestone mixed with additives at high temperatures in the cement plant’s kilns. Today, the company is importing it from abroad.

“In my book, importing clinker, a material that is usually produced in our plant, is the same thing as using scabs to do our jobs in our place. How can you expect to maintain a fair balance of power in these circumstances?” Gagné asked.

Several members of affiliated unions also took part in the march, including QFL President Daniel Boyer, and General Secretary Denis Bolduc, who assured the locked-out workers of “how important it is for us to stand by your side. Your fight against Ash Grove - CRH for the respect of union rights is crucial. As trade unionists, it is a fight we all share.”

“We would like to thank all those who took the time to march with us. Your support gives us energy to continue the struggle,” said Local 177 President Eric Giasson.

Members of Local 177 have been illegally locked out since May 22, 2021, and legally locked out since June 3, 2021. Despite several bargaining sessions, the dispute is ongoing. The employer is attempting to extract numerous concessions from the Local’s members, particularly on the issue of subcontracting, all within a context where dozens of members stand to lose their jobs due to the closure of two out of four kilns.