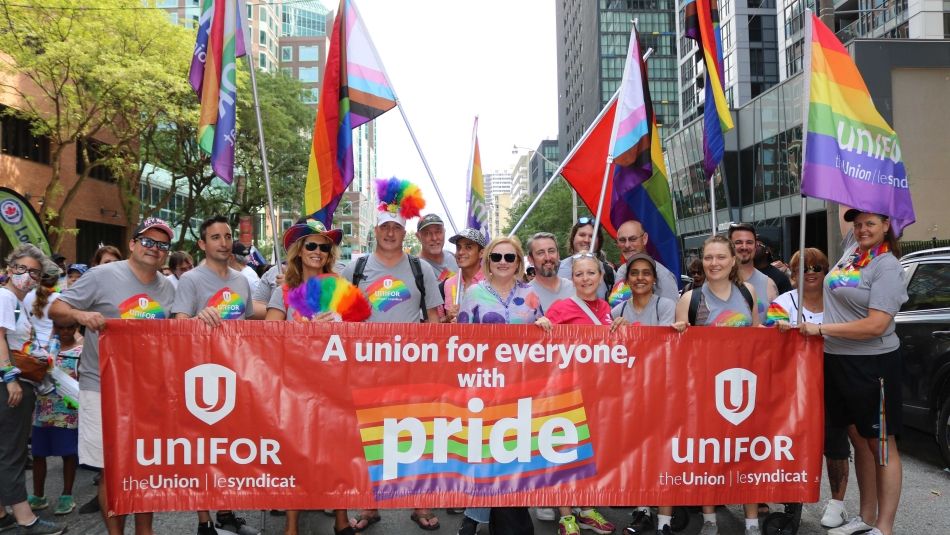 Pride activists are dusting off flags and banners after years of cancelled festivities and social isolation.

This past weekend’s Toronto Pride festival saw an estimated 1.8 million people come out to celebrate the LGBTQ community. Unifor joined in the celebrations and marches, including an important emergency action on Saturday June 25, 2022 in support of reproductive justice.

“LGBTQ rights, including reproductive rights, are worker’s rights that must be defended and expanded. As trade unionists we fight for full equality for all every single day because we know rights are never given but rather taken through struggle,” said Lana Payne, Unifor National Secretary-Treasurer. “Unifor participates in Pride marches like this one to publicly show our union’s support and solidarity with queer and trans members and their families.”

Pride festivals, large or small, are important opportunities for local unions to engage with their communities and members. In cities and towns across the country, Pride season continues over the summer and early into September.

To help prepare for pride, or show your pride year-round, local unions can order and purchase materials from the workroom using this form (PDF).

“Even getting a small group of members together to attend a pride parade, picnic, or community fair can make a difference to LGBTQ members,” said Sarah McCue, Unifor’s LGBTQ Liaison. “Workers need to know that their union is an enthusiastic supporter of their rights, especially at a time when rights and even identities are actively being called into question in Canadian politics and around the world.”

Local unions are encouraged to register and organize around Pride events in their regions, and reach out to regional Pride Committee representatives, Regional Councils and the national union for support.

“It’s been incredible to be back out in the streets with members celebrating their families and identities, and talking with all participants about our union’s support for the LGBTQ community,” continued Payne. “I hope to see more Unifor members join and support these events as a proud symbol and celebration of the work LGBTQ activists and allies do from within our union.”