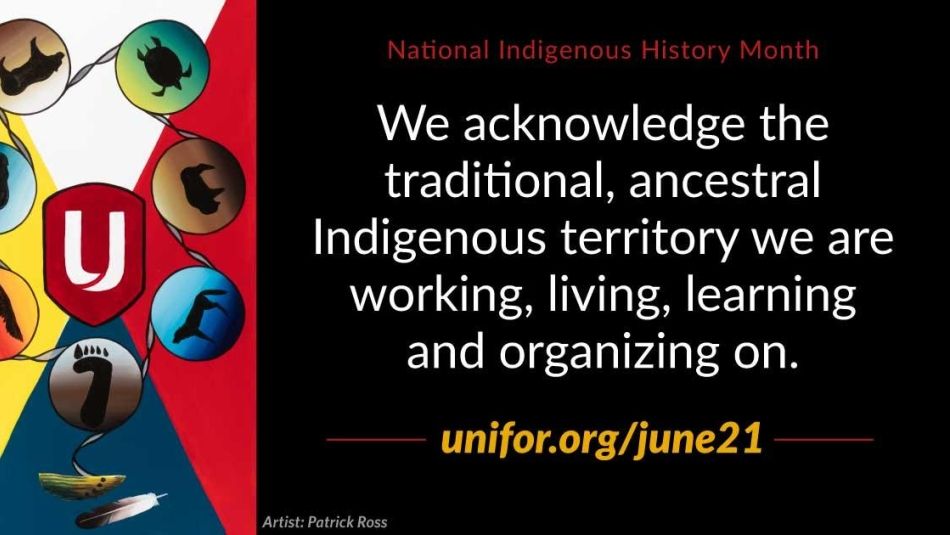 Unifor commemorates the International Day of the World’s Indigenous Peoples on Monday, August 9 and this year’s commemoration focuses on the theme “Leaving no one behind: Indigenous peoples and the call for a new social contract”.

On this day, we honour and recognize the diverse culture, history and achievements of Indigenous Peoples here in Canada and around the world. We call on all governments worldwide and for all Canadians to recognize and respect Indigenous rights wherever Indigenous citizens reside.

The International Day of the World’s Indigenous Peoples was first established by the United Nations in 1994 to mark the day of the first meeting of the UN Working Group on Indigenous Populations. On this day, people around the world are encouraged to spread the UN’s message on the protection and promotion of the rights of Indigenous Peoples.

The Covid 19 pandemic has laid bare the inequalities affecting Indigenous communities in Canada and around the world. The United Nations has called for plans to build stronger, equity-focused health systems and to strengthen social protections and public services that are based on the genuine inclusion, participation, and approval of Indigenous peoples.

What would a new social contract between citizens and states that secures rights and dignity for all and leave no one behind look like? That addresses the needs of groups that are often left out? The choices made by world leaders must heed the calls create a just and sustainable future that ensures that all people can share in prosperity. We need a new social contract that delivers recovery and resilience.

In the upcoming year, our union will work to pressure the Government of Canada to act on the following:

The 2021 commemoration of the International Day of the World’s Indigenous Peoples will feature a virtual interactive discussion on the distinct elements to be considered when building and redesigning a new social contract that is inclusive of Indigenous peoples—where Indigenous peoples’ own forms of governance and ways of life must be respected and based on their free, prior and informed consent and genuine and inclusive participation and partnership.

Unifor is a key supporter and sponsor of the Winnipeg community-driven campaign to drag the Red River in Manitoba. When the community organizers needed a new vessel to continue their work, Unifor made a donation from the Canadian Community Fund to supply a new purpose-built aluminum boat.

On Monday August 9, International Day of the World’s Indigenous Peoples, we will be sharing a new video documenting the Drag the Red Boat launch and the history and context of this important project.