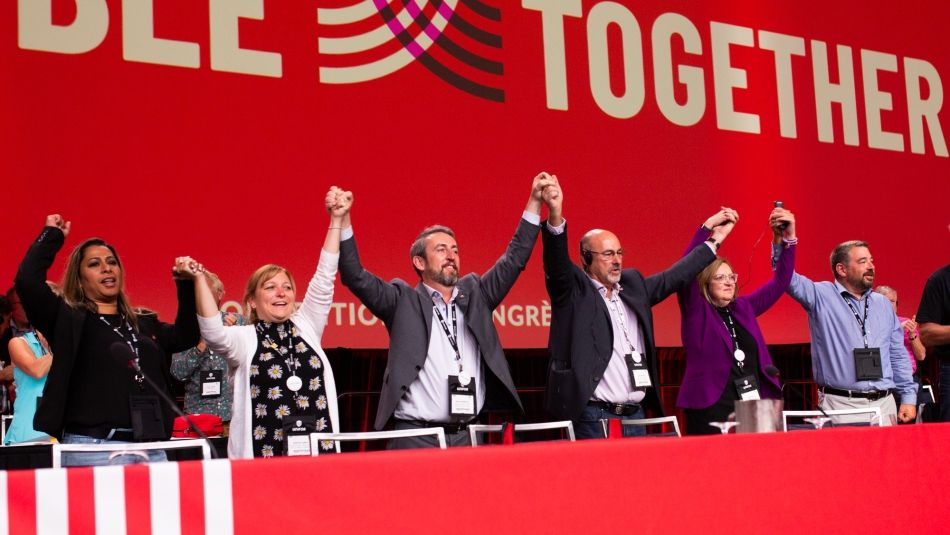 TORONTO – Lana Payne has been elected as the new National President of Unifor, the first woman to hold the position.

“Today, we turn a page. Today, we move forward. Today and every day, we put our members at the heart of everything we do,” said Payne after her win was announced.

Payne was previously National Secretary-Treasurer of Unifor, and was the first woman to hold that position, as well. She defeated Executive Assistant to the President Scott Doherty and Unifor Local 444 President Dave Cassidy.

“I want to thank Scott and his team and Dave for showing our union that we can have a conversation about the future of our union,” Payne said.

Delegates to Unifor’s fourth Constitutional Convention elected Payne on Wednesday. She announced her candidacy in April after both Doherty and Cassidy had already entered the race.

Throughout the campaign, Payne championed the need for greater transparency and accountability in the union.

“We can have a fighting transparent democratic union. We can build this union stronger, and we will, all of us together,” Payne said.

Payne is a former journalist and past president of the Newfoundland and Labrador Federation of Labour. Prior to being elected Secretary-Treasurer in 2019, Payne was the founding Atlantic Regional Director for Unifor. She began her involvement in the labour movement in 1991 with FFAW/CAW.

Payne led Unifor’s efforts through the COVID-19 pandemic, including the fallout for members – both those facing layoff and those in essential services such as retail, warehousing and healthcare who faced increased workloads and new workplace hazards – while providing information on health and safety measures and tips on navigating new government programs.

Payne was also the first Secretary-Treasurer to produce a budget for the national union, which was adopted by delegates on Monday.

That budget will be administered by Len Poirier, previously an Assistant to the President, who was elected Wednesday to replace Payne as Secretary-Treasurer.

“We have a lot of work to do to achieve what Unifor was meant to be,” Poirier said at his nomination.

Daniel Cloutier, elected as Quebec Director in May, was affirmed to the position on Wednesday, replacing Renaud Gagné, who is retiring.

“The union is not the business of a single person, it is together that we will work and advance towards the common good, by putting the interest of the members at the center of our actions,” Cloutier said in his report to the convention.

“Every single member of this great union deserves to have their voices heard,” Murray said at her nomination.

“I pledge, I will always do what is right for our members,” McGarrigle said at his nomination.