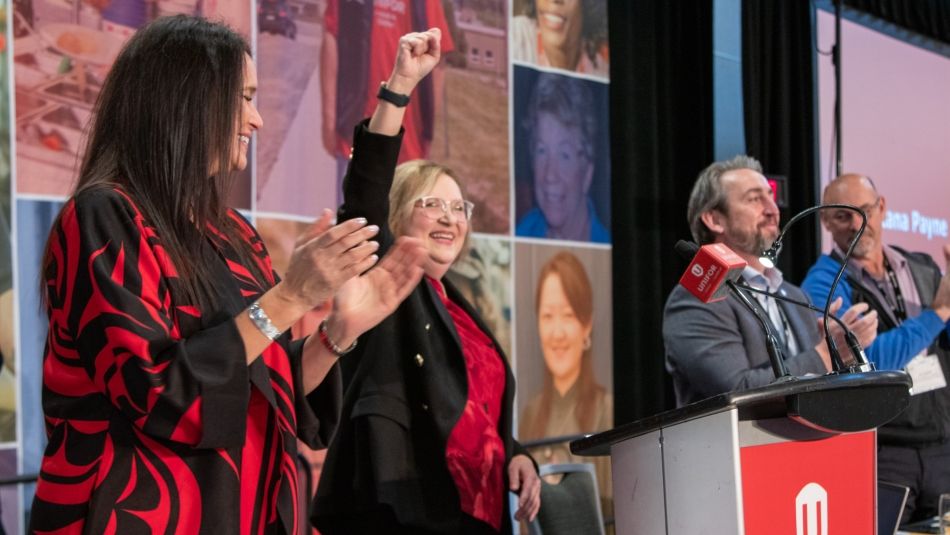 The second day of the 2022 BC Council opened with remarks from Angela MacDougall of Vancouver’s Battered Women’s Support Services. MacDougall is a well-known activist who has worked for decades to end femicide, the killing of women and girls because of their gender.

She shared statistics about the alarming rise of violence against women during the pandemic and provided examples of the campaign work BWSS has done recently raising awareness of the crisis.

The day’s second guest was Northern B.C. missing and murdered Indigenous women, girls, and two-spirit (MMIWG2S) victims and survivors advocate Gladys Radek. She shared heart-breaking stories about losing her niece on the Highway of Tears and the growing list of missing loved ones. She challenged Unifor activists to continue supporting efforts to end the violence and support healing and asked for participation in the Tears to Hope relay race.

National President Lana Payne began her remarks by reporting back on the previous week’s lobby meetings with MPs and cabinet ministers. She directed criticism at the Bank of Canada for its indefensible position of increasing inflation with the explicit intention of increasing unemployment. She also reminded delegates about growing and outrageous profits enjoyed by large employers who still fight Unifor on wage increases.

“We must never shy away from speaking the truth,” said Payne. “Workers did not cause the problem, and they should not pay the price.”

Instead of blaming workers and sacrificing their jobs and wages, Payne said this is a moment to mobilize and build a better, fairer economy: “We have to use this moment to [deliver for working people]…now is the time to modernize labour laws.” Specifically, she named the ongoing campaigns to end contract-flipping, scab labour, and privatization.

Whistler Mayor Jack Crompton attended the Saturday afternoon session and brought greetings from the municipality. Mayor Crompton was complementary of the work done by Unifor members, especially those working in the local transit and hospitality sectors.
The 2022 BC Council’s final guest speaker was B.C. Minister of Labour Harry Bains. Minister Bains has a long history with Unifor and the labour movement, going back to his time as a labour activist in the 1980s.

He reviewed the long, anti-worker record of the relatively new leader of the opposition, Kevin Falcon. Falcon was a key figure in the government of Gordon Campbell during the hard-right policies introduced in the early 2000s.

Bains contrasted that record with the gains for workers introduced during the John Horgan BC NDP government, such as the highest minimum wage in Canada, paid sick days, far stricter health and safety regulations, and single-step union certification (card check).

BC Regional Council's Black, Indigenous and workers of colour caucus elected a new committee and planned to mark the 75th anniversary of the UN Universal Declaration of Human Rights on December 10, 2022. The committee took a moment to recognize retiring member Hopeton Hague (Local 1990) for his years of activism and welcomed his promise to mentor new committee members.

National Secretary Treasurer Len Poirier led the oath of office for the newly elected BC Council Executive and Standing Committees.