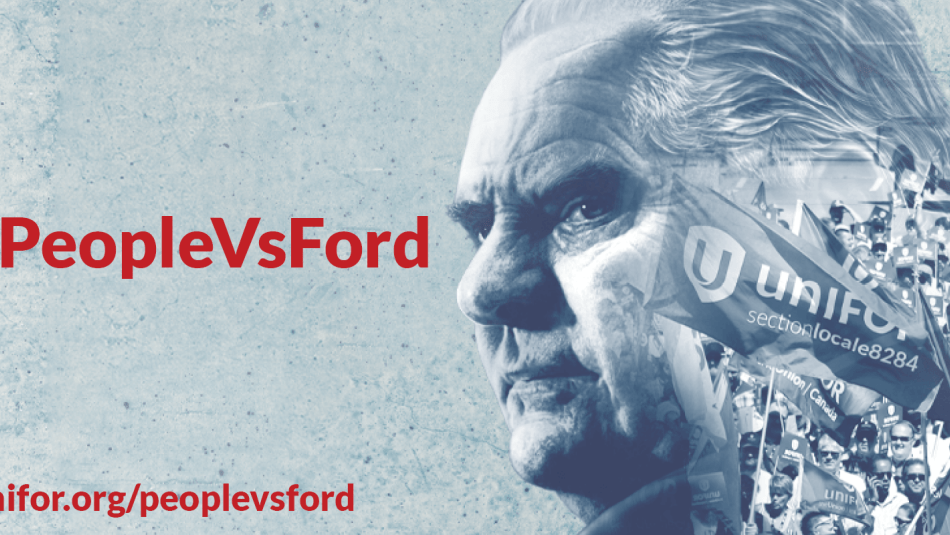 TORONTO – Unifor is appalled by Premier Doug Ford’s insistence on denying the people of Ontario their Charter rights by invoking the Notwithstanding clause to trample on voter’s rights.

“Ford has shown just how afraid he is of Ontario voters and by supporting this desperate and disproportionate move, his MPPS will reveal the lengths they will go to protect their king,” said Jerry Dias, Unifor National President.  “If the government can thumb their noses at the law and the Charter then no one should adhere to it. For every dime we were planning on spending to fight the Ford regime in the next election, we will now spend a dollar.”

In a decision released on Tuesday June 8, the Ontario Superior Court declared that the restrictions on third party political advertising prior to the election period included in Bill 254 violate the Charter right to free expression and are not justified under section 1. The Court declared these provisions of no force and effect, effective immediately.

“Voters, essential workers, and every person in Ontario should be shocked and disgusted that their Premier is treating the Charter as an option instead of a requirement. Invoking the Notwithstanding clause does not make Ford’s cowardly law constitutional, but it does strong arm Elections Ontario and the Courts to side with Ford instead of the people of Ontario,” said Naureen Rizvi, Unifor Ontario Regional Director. “The speed and severity of this move cuts even deeper during this week of mourning. Ford has shown that he can move quickly, but only to save his own image.”

Unifor encourages every MPP to respect the rule of law, including the role of judges in limiting breaches to the rights and freedoms of every person in Canada.

Unifor members and members of the public are invited to visit unifor.org/peoplevsford to contact their MPPs immediately, and demand that they vote against the Ontario government’s proposed use of the notwithstanding clause.

“Workers know that rights are not gifts or favours, they are hard won victories that we will not give up just because Doug is scared of the people of Ontario. Unifor will not comply with this law, and our opposition to the Premier’s attacks on workers and dangerous policies will only grow louder,” continued Dias.