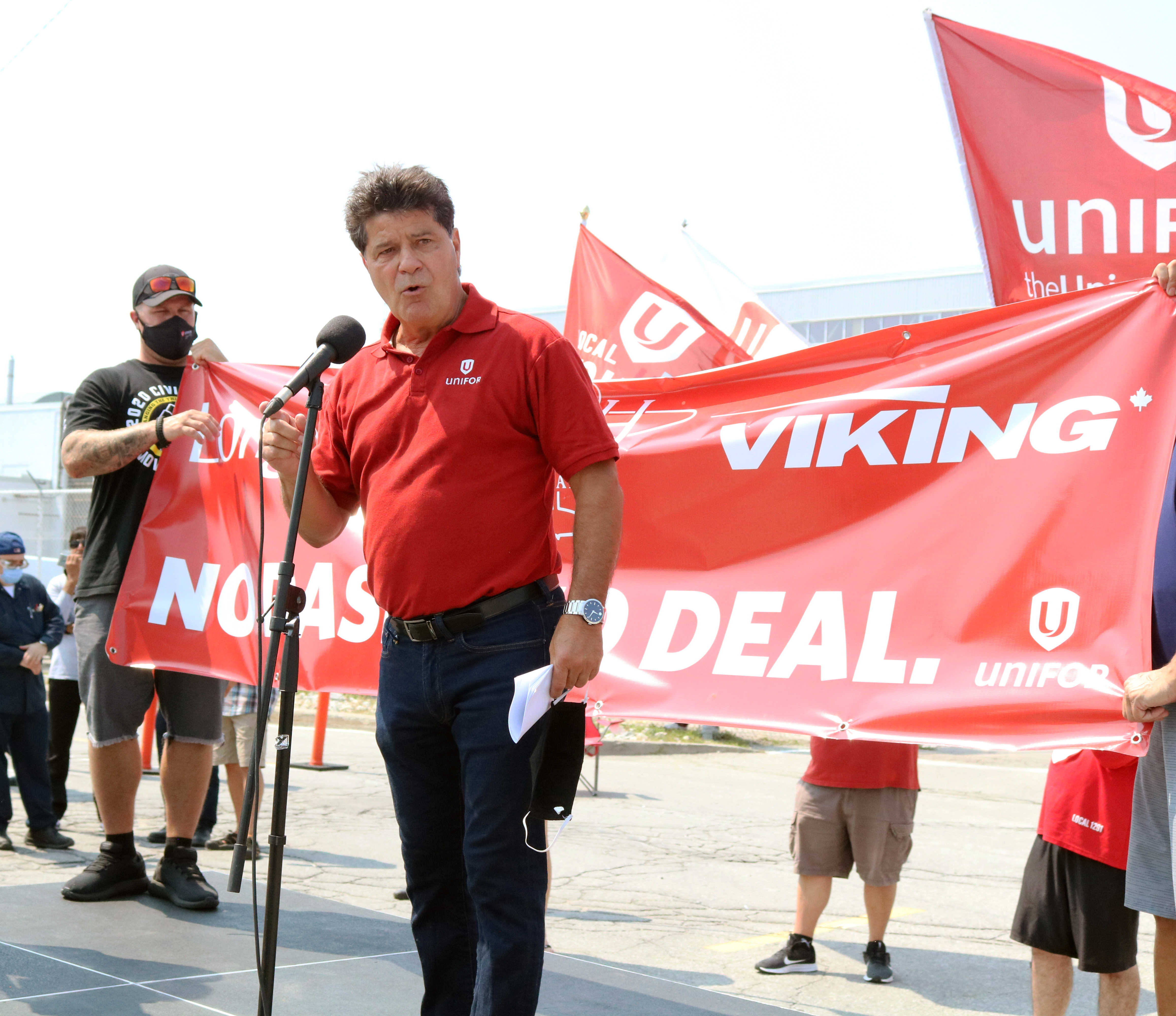 The pride of De Havilland is in its generations of dedicated workers who built the company, a rally for striking workers at the plant heard Monday.

“They like to talk about the company as if it’s them,” Unifor National President Jerry Dias told the crowd. “The pride of De Havilland belongs to us.”

Workers at De Havilland have been on strike since Tuesday July 27. Parent company Longview Aviation Capital announced earlier this year it would no longer build any new Dash 8-400 aircraft at the Downsview plant– a central issue in the strike.

Dias said Longview has played on the heritage of the company, from building the Mosquito during the Second World War to the Beaver bush plane to the Dash 8 – a proud history “that they bought, but did not earn.”

The future of the Dash 8 at the Downsview plant was cast in doubt before, 30 years ago when the plant was sold at that time, but was saved at the insistence of workers and with federal government intervention.

Dias said he is in talks to ensure any federal assistance to Longview comes with recognition of the rights of Local 112 and 673 workers. Dias said he has been in talks with all levels of government about the future of the plant.

“We are not going anywhere. This is my plant, just like it’s yours,” said Dias, who began his career at the Downsview plant.

George Kosinski, who works in fabricating, has been at the Downsview plant for 43 years. He went on strike shortly after he started to protect the plant, and is on strike again as he plans to retire. He is proud to work there and takes his grandchildren to see the new planes.

“They say, Grandpa, did you build that plane? And I say, I built part of it. It takes a lot of skilled people to build a plane,” the Local 112 member said shortly before speaking to the crowd.

Spare parts buyer Erica Warnick said generations of the same families have worked at the plant, and are proud to be a part of Canada’s aeronautical heritage.

“Their whole lives are wrapped up in this. There’s no Dash-8 without us,” the Local 673 member said.

Local 112 President Scott McIlmoyle said workers at the plant were assured they have a strong future when the new buyers came in only to be betrayed.

Local 673 President Maryellen McIlmoyle said Longview and CEO Sherry Brydson of the billionaire Thomson family, needs to remember who made De Havilland a company worth purchasing.

“It was us, the workers, who built De Havilland.”

Ontario Regional Director Naureen Rizvi called on the company to resume talks with the union to reach a settlement.

“There is only one way to bring this dispute to an end, and that’s for De Havilland and Longview to get back to the table and negotiate a fair deal.”