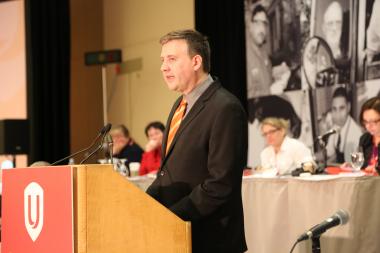 Canada has more than enough capacity to meet all its oil needs, if only it had a national energy strategy, the federal NDP critic for science and technology says.

“We want to make sure we are using Canadian resources for Canadians,” Kennedy Stewart told Unifor’s BC Regional Council this morning.

Following his address, delegates voted unanimously to support a national energy and environment strategy that calls for Canadian oil to be used for Canadian needs, while protecting the environment, introducing strict limits on greenhouse gas emissions and respect for First Nation rights.

Canada actually produces more oil than it uses, Stewart said, but has focused production more on export markets than on serving the needs of Canadians.

“For some reason, we’ve messed it up so badly that we’re importing all kinds of oil,” he said.

As a result, Canadian refineries have been scaled back or closed as our bitumen is exported for refining elsewhere.

“If we had a west-east pipeline, we could keep those refineries open in Quebec and the Atlantic provinces,” Stewart said.

The NDP has been pushing for a national energy strategy that gears oil production to serving Canada’s needs first. The idea, however, has fallen on deaf ears, with the Harper government determined to “ram” pipelines through the mountains to the BC coast so Canadian oil can be exported to China, Stewart said.