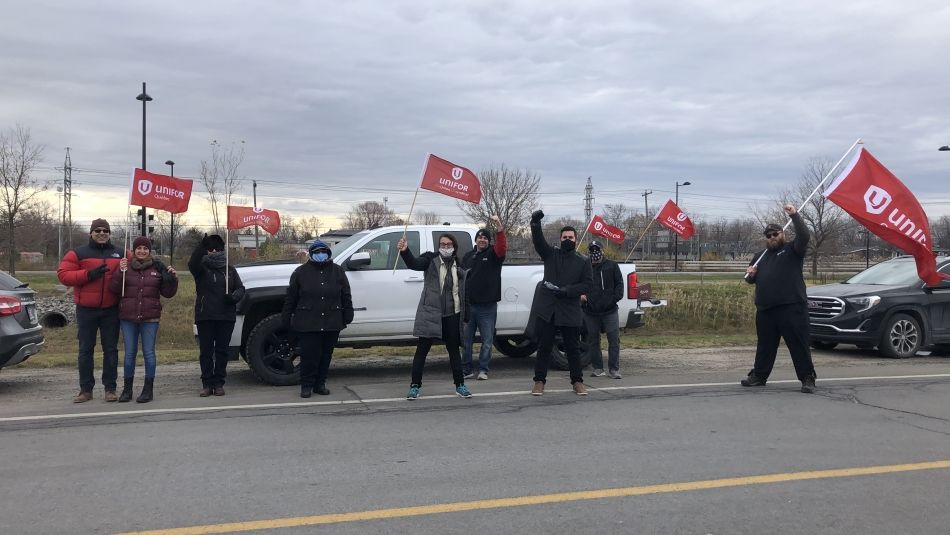 Montreal, November 18, 2020 – Employees of Gate Gourmet were shocked last week when their employer interrupted their lunch break to tell them to take their personal effects and vacate the premises, as they were being locked out.

“No final offer or warning was given by the employer,” said Unifor’s Quebec director Renaud Gagné. “We were waiting to hear back from them and now their only answer is a lockout. It makes no sense.”

Talks between the parties, which began in July, were not going well prior to the lockout. The employer was demanding several major concessions, including a five-year wage freeze, hiring only part-time and seasonal employees (no full-time), member payment of 40% of group insurance costs (currently paid entirely by the employer), reduced accessibility to insurance, a cut to shift premiums, abolition of the weekend premium, a cut in the employer’s contribution to RRSPs, fewer statutory holidays, withdrawal of vacation weeks and elimination of numerous articles in the collective agreement dealing with non-monetary issues.

The employer has tabled no fewer than 145 demands, all of which involve concessions. For its part, the union has not demanded any concessions.

“The simple fact is that the employer wants to abolish our collective agreement altogether. And despite our repeated requests, they have given us no explanation. We understand that the sector is struggling as a result of COVID-19. And in light of that, we were fully prepared to engage in serious discussions and do our part,” said. François Arseneault, president of Local 698.

“But this makes no sense. The employer is taking advantage of the crisis to roll back all our gains. They are even claiming that the workers are to blame for the situation, even though the lack of contracts is the result of a structural problem in the plant combined with the pandemic.”

Since Gate Gourmet bought the plant 10 years ago, workers have made a number of concessions in good faith, but this did not prevent the company from losing several contracts.

“At this time, no date has been set for talks, but we remain available to negotiate. The case is in conciliation and we will be asking the mediator to call the parties together. But in view of the employer’s attitude so far, we have doubts about their good faith. One thing is clear: we are determined to defend our members,” Gagné said.

The lockout has put workers with more than 30 years of service on the street. Gate Gourmet provides airline catering. The Dorval plant has laid off hundreds of Unifor members in recent years due to the loss of contracts and COVID-19. Only about 20 employees were still active at the time of the lockout, and most of them have more than 30 years of seniority.

A picket line has been set up in front of the plant at 1185 Rodolphe Pagé Street in Dorval.

Unifor is Canada's largest union in the private sector and represents 315,000 workers in every major area of the economy. The union advocates for all working people and their rights, fights for equality and social justice in Canada and abroad, and strives to create progressive change for a better future. Unifor represents close to 55,000 members and is affiliated with the province’s largest labour federation, the Quebec Federation of Labour (QFL).