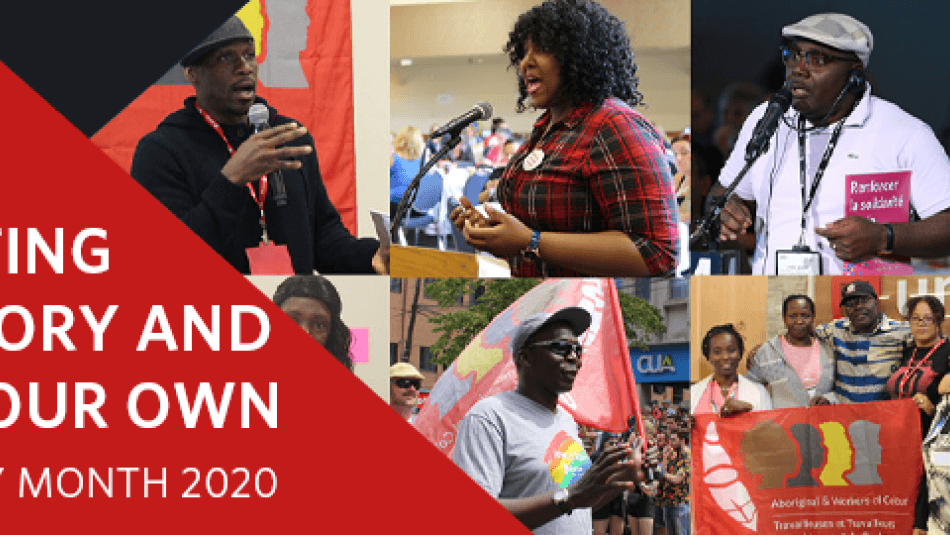 Lorna Bowden has been fighting for equality for more than 16 years with Local 2289 and is a trailblazer for other Black Activists.

Lorna saw the need for diverse representation in her union and made her mark as the first black worker to be Chief Steward with Local 2289, Bell Canada in Nova Scotia. Along with her long-standing activism, she was the first to set up a Women’s Committee and a Human Rights Committee for her local. Lorna is a standing member of the Atlantic Regional Aboriginal and Workers of Color (AWOC) committee and is involved with all facets of this work in her community and union.  Lorna uses her voice to promote diversity and equality for all and enjoys educating and supporting other workers.

One of Lorna’s favorite quotes is “Change will not come if we wait for some other person or some other time.  We are the ones we’ve been waiting for. We are the change that we seek.” – Barak Obama.

Lorna draws inspiration from the support of the union, the community, and her family – who all give Lorna the courage to spark change.

She came to Canada almost three decades ago during an unforgiving apartheid regime. Upon arrival to Canada, she recognized the need to share African Culture and found two important avenues to do so through song and dance. She joined two groups, the Sifa Choir and the Mugala Band.

Nokuthula has been a Shop Steward at her local for seven years and has been working at Rexall Pharma Plus since September of 2005.

Working in public facing roles forces her to confront racism and discrimination daily. She relishes her duties at work and understands the importance of tackling inequality head-on. Nokuthula notes that she is results and goal oriented, which helps her further organize her local to fight for workers’ rights.

Currently, she is starting an Aboriginal and Workers of Color Committee in her region – her local is active, and she is confident that members will continue to rise up in the fight for justice.

“Workers united will never be defeated!”

Patrick Baril was actively involved – alongside our respected late Brother François Beaudoin – in the certification process for his unit, Nikon Optical Canada. After several hearings before the Administrative Labour Tribunal, the unit was certified on February 10, 2017, becoming part of Unifor Local 698.

Following certification, Patrick joined forces with his national representative to lead the negotiations that resulted in his unit’s first collective agreement. Despite the departure of some members of his bargaining committee, Patrick never gave up. After almost two years of talks, the parties finally arrived at a settlement and a first collective agreement was signed on November 2, 2018.

Patrick is the chairperson of his unit and also serves as a guide on the Executive of Local 698.

Emily Coulter is Trinidadian – from the islands of Trinidad and Tobago.

Emily grew up in the Carribean and moved to Canada when she was 19 years old. Moving to Canada proved to be a jarring culture shock and monumental change – especially because of the weather. Traversing from warm climate and rich blue skies to Canada’s frigid, long winters taught Emily to be adaptable.

In reflection on the big move, Emily notes that the challenges she faces as a new immigrant women and person of color made her stronger. She learned to deal with discrimination and racism, all while adapting to a new way of life. Emily is now a mom of two and trying to raise her children (both girls) in a world where women, especially women of color have to fight twice as hard to be respected or taken seriously. Emily’s activism starts at home by raising strong women and teaching them to stand up and use their voice.

Emily is a proud member of the Aboriginal and Workers of Color Committee at her local.

“Together our voices will be heard as we move toward change in the present say and strive to make a difference for tomorrow.”

“Celebrating our History and Making our Own” was this year’s focus for Black History Month – we chose this theme to focus on how knowledge sharing transcends through generations, and how we must celebrate our past in order to lead in the future.

My past teachings come from my father Paul Mitchell. He has been a proud unionist his entire life including tenure at UAW, CAW, and now Unifor 1285. Through him and his 39 years of union activism, I learned the true meaning of what it means to be an activist and ally. In my youth, we attended send off parties for Agricultural workers from Jamaica. He said, “keep your eyes wide open” and taught me about the capitalism and its use of race as a tool for division and inequality. He taught me to speak up; even it meant being a lone voice. He raised all six of his children with this strength and wisdom.

Leading to now, I reflect on my 20 years of union activism. My “tap on the shoulder” came from my local President, Vince Bailey, who we featured earlier this month. He saw something in me I didn’t necessarily fully realize in myself, and he took action to encourage me to take the leap. He insisted that I attend a two-week Aboriginal and Workers of Color (AWOC) leadership course in Port Elgin. I was initially hesitant, but went to the course and became immediately hooked.

During my time of rapid union involvement, I raised a daughter who epitomizes what it is to embody union activism. Brianne Mitchell Wilson grew up in our union, and as early as age six was completing tasks with pride. We became close allies and mentors for one another. Aside from her deep involvement at the local level, she was member of the Women’s Committee where she connected with young workers during conferences. Now, she is an avid activist at Local 1285, a member of the Young Workers and AWOC committees – she is making history with her work.

This is the meaning of Black History for me. We must continue to celebrate and learn from our history, we must be examples and mentors for our future generations and we must ensure our young people have space and recognition for their creative, innovative ideas. This is the recipe for success for future generations.