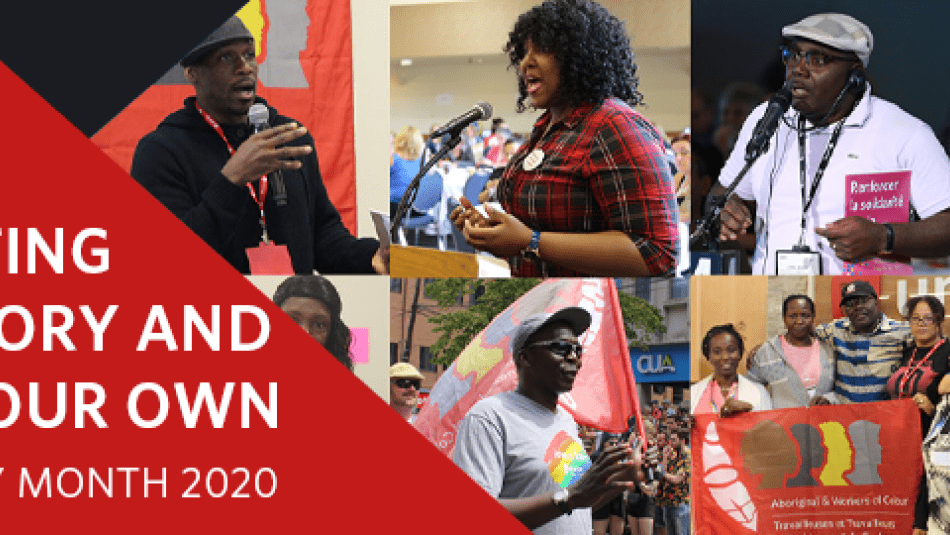 Ruth Pryce is the President of Local 1106 and the first Aboriginal and Worker of Colour representative for Unifor.  She began work with Revera Long Term Care in 1999 as a personal support worker.

In 2007, she was elected as trustee for Local 1106 and in 2010 as vice-president where she was a full time representative, servicing bargaining units within the local. She has also served on her local’s Women’s and Education committees.

Ruth was a delegate of the Waterloo Regional Labour Council, where she serves as a trustee. She was elected co-chair of CAW Council Aboriginal and Workers of Colour, a position she has held for three years, and was chosen to represent CAW at the OFL Workers of Colour Caucus. CAW is one of the founding unions of Unifor, with CEP.

Outside of Unifor, she is an active founding member of the London, Ontario, area group, Helping Hands of Antigua and Barbuda and Friends.

Ruth got involved with her union after she could not ignore the injustices and unfair treatment happening to her co-workers.

Jackie was born in Bath, England.  When Jacqueline was seven, she was excelling in gymnastics, track and field, the choir and presented flowers to the mayor’s wife for an event at the school.  Jacqueline and her sisters were the only black students in the school and the community.

The older kids called Jacqueline – Backie Jackie.  Her Mom had a memorable chat moment with Jacqueline.  Jackie’s Mom said, “First, people who meet you will see you as black, then a girl or young woman and finally, see who you are as the true Jacqueline that you are.”  It gave Jacqueline the chance to deal with racism and bullying at that time. It was the first step to becoming the activist that she is today.

When Jacqueline was nine, she had the chance to move from England to Canada with her family. She graduated from the Niagara College of Applied Arts and Technology with a Diploma in Broadcasting - R­adio and Television.

In 1989, Jackie started working at CTV News and Programming Operations. She was the first woman to be hired full-time as an Editor.

Many thanks to Ann Newman, who worked for Bell Canada, in Jackie’s eyes was a true soul activist and was one of the founding members of the Coalition of the Black Trade Unionist (CBTU) Canadian Chapter1.

Sister Ann Newman encouraged Jackie to run in 1995 as the first sister to be the Visible Minority on the CEP Women’s Committee. The early years of being involved with CEP gave Jackie the chance to work beside so many strong Aboriginal sisters and Sisters of Colour.

Presently, Jackie is an active member of the Ontario Regional Political Action Committee. At the beginning of 2017, she lobbied to change the Media Industry to help journalists and media workers. Jackie also lobbied to stop Bill C-27 from eroding pension security, lent her support to a Canadian National Pharmacare Program, and worked to help legislate pay equity.

Jackie has supported and participated in countless Unifor strikes and political protests during the municipal, provincial and federal elections. She is a community leader and public speaker who has actively campaigned for the Unifor National, the Ontario Region, and her local, Unifor 79M.

‘Activism is energizing! It empowers me’

Deanne Smith is a member of Unifor Local 25. She has been involved in her union for over 20 years as a steward and is presently serving as a chief steward for the past 6 years.

She is also a member of the Unifor Ontario Regional Council LGBTQ Equity Committee for the past 3 years serving to support the members, work collaboratively with other equity seeking groups, and to increase membership participation in the various areas of the union.

Deanne has been an activist in elected student union positions throughout her time in CEGEP and university as she has a keen interest in issues that affect women, racialized workers and the LGBTTQ2SI community.

She is passionate about advocacy, community activism, education, and acts as a mentor for the Women Transitioning to Trades program operated through George Brown College.

Deanne enjoys working with individuals and assists with them regaining their voice and power. She also works on changing policies and practices not only in her workplace but also in society. In addition, she is constantly helping to create new strategies to achieve these goals.

Working with city and provincial political candidate campaign teams doing canvassing is her way of carrying out part of her civic duties.

The 519 Community Centre, Sistering Women’s shelter, Blackness Yes/Block-O-Rama, EGALE and Rainbow Railroad are organizations that Deanne is a liaison with and supports in their efforts to provide service  to community members. Be it rescuing LGBTQ members fleeing domestic violence or violent countries, supporting victims of homelessness/under housing and assisting with workshops for newcomers in various religious communities.

As soon as she set foot in what was a traditionally male-dominated environment, Marie-France knew she wanted to get involved in this new and unfamiliar world of unions... The time was ripe for a new generation of women – a generation of women of colour. “Why not?” she thought.

Marie-France has worked in furniture finishing for over 20 years. Upon joining Bombardier Aerospace in 2010, she discovered a whole new world: the world of unions!

Unfortunately, her early days in her new workplace were not very pleasant. She faced several episodes of flagrant disregard for her person and quickly realized that not everyone in the male majority was ready to accept the presence of a woman, much less a woman of colour. She had to fight even harder to make a place for herself, but in the end she succeeded brilliantly.

After obtaining permanent status at Bombardier, she discovered the many advantages a union like Unifor can offer its members, especially members like herself. Almost immediately, she joined the Women’s Committee of her local union, Local 62. That marked a turning point for her. She enrolled in a variety of union education courses and gradually became more aware of the many ways in which unions contribute to the struggles of equity-seeking groups. She realized how many battles had already been won, but also how many still lay ahead.

Understanding the importance of getting involved, she made a personal commitment to become more actively engaged in her union. She was elected a trustee and served on the Executive of Local 62. With the support of her local union, she was also elected to the Women’s Committee of the Unifor Quebec Council. She points out that this marked the first time a racialized woman was elected to both of these bodies simultaneously. She did not stop there: three years later, she became the second vice-president of Local 62, in addition to being elected chair of the Quebec Council’s Aboriginal and Workers of Colour Committee. In another first, she was also appointed a discussion leader by Unifor Quebec.

All these roles exposed her to several other aspects of unionism. For example, as a member of an advisory panel on equity, she helped identify and clarify shortcomings within her union with regard to equity-seeking groups. Major efforts are already under way to address these shortcomings. She is extremely proud to be a member of a union that understands the challenges facing these groups.

Marie-France is also passionate about getting actively involved in the community. She doesn’t hesitate to take part in demonstrations and is not afraid to take to the mic to denounce injustices and propose solutions. Thanks to the collaboration of the Quebec Council’s Aboriginal and Workers of Colour Committee and Unifor Quebec’s Education Department, the very first course dedicated to members who identify with these groups will be offered to them in winter 2020.

Whether it’s an election campaign, collective bargaining talks, demonstrations in support of striking members in different sectors, or simply talking to members of her local union, to her colleagues in the workplace or to people in her community, Marie-France will stop at nothing to try and help make the world a better place… You might say she’s an eternal optimist.