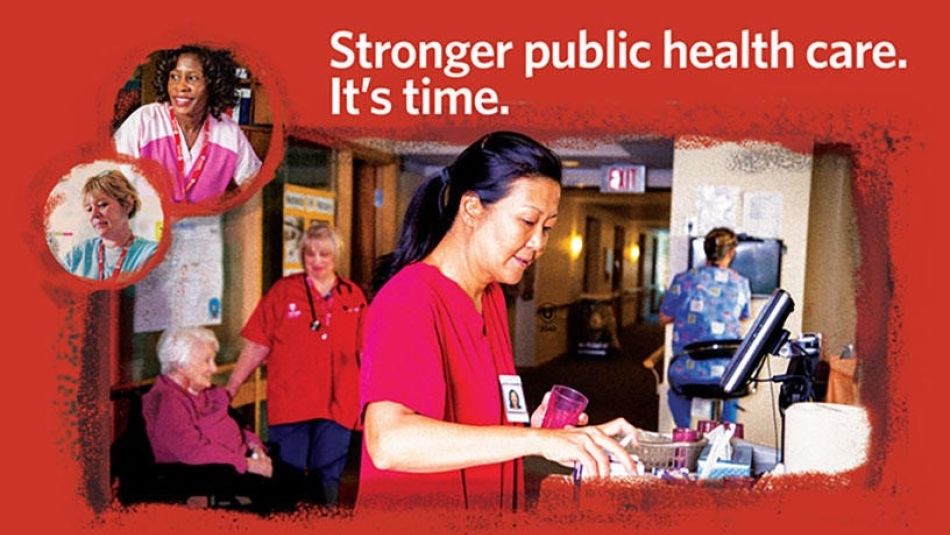 “A new Liberal government will re-engage on Canadian health care and negotiate a new Health Accord with provinces and territories, including a long-term agreement on funding.”

That ratio of health spending to GDP has actually been in decline since 2009, much like the decline seen in the mid-1990s that prompted the 2004 Health Accord reinvestment.  The increases in health spending in Canada have slowed noticeably over the past five years, and are now routinely outpaced by GDP growth rates.

The myth of unsustainable health spending spiralling out-of-control is at complete odds with our recent history.  Canada has actually fallen dramatically from second place (behind the United States) relative to other peer OECD countries in most critical respects but drug spending:

Romanow recommended that future federal expenditures as a minimum should be based on its past cash commitment of 25% of provincial-territorial costs for health services covered under the Canada Health Act.  This has been the target advocated by the provinces since 2004 and was repeated by the CFNU and several premiers during the 2015 federal election.  At the inception of public universal hospital insurance, the federal government offered 50% cost sharing to provinces.

In 2001/02, the cash value of the Canada Health and Social Transfer (CHST) contribution was approximately 18.7% of provincial-territorial expenditures for physician and hospital services under the Canada Health Act; decreasing even further by 2005/06 to 16.7%, as the 2004 Health Accord was launched.

The Parliamentary Budget Office (PBO) projected the share of federal Canada Health Transfer (CHT) cash payments in the absence of a renewed Health Accord would decrease from 20.4% in 2010/11 to average 18.6% over the remainder of this decade - falling back to 2001-02 levels.

Provinces are not equal in their fiscal capacity, much less their population demographics.  Newfoundland and Labrador, Saskatchewan and Alberta are well above the provincial fiscal average due to natural resource revenues, while Prince Edward Island, Nova Scotia, New Brunswick and Ontario are below the average when comparing per capita own-source revenues.

Provinces also have different populations, in terms of growth rates; proportion of elderly, aboriginals or immigrants, as well as incidence of diseases. These differences affect health needs which in turn require varied funding to sustain the provinces’ respective health systems.

Nearly one quarter of Canada's population is projected to be over the age of 65 in 2036, with significant variation across provinces and territories.  Atlantic Canada, in particular, is aging at a faster pace than the rest of the country.  And, as the prevalence of many diseases increases with age, the burden of chronic illness will also rise as the population on average grows older.

Although equal per capita cash payments may seem like a simple and visibly “fair” distribution, the method is far from equitable as it ignores actual reported health needs.

The past 6% annual automatic escalator in the 2004 Health Accord was dropped by the Harper Conservatives in December 2011 when announcing that the CHT escalator would be tied to nominal GDP growth beginning in 2017-18, with a minimum 3.0% annual increase.  With the prospect of slower growth and lower inflation, a campaign for renewing an automatic 6% escalator is daunting.

The challenge today is for the federal government to make the most of its role and levers to support the next generation of improvements to healthcare in Canada, including establishing national standards and enforcing the terms of the Canada Health Act.  The Liberal federal campaign did announce a $3 billion commitment over 4 years to enhance home care as well as a $20 billion social infrastructure investment - including seniors housing and LTC homes.

The Health Accord campaign is about building a federal-provincial partnership on a foundation of stable federal funding to deliver critical social progress through a national universal pharmacare plan; a robust integrated senior strategy including continuing care and home care.

Stable but conditional federal funding also is the best guarantee of national standards and consistent enforcement of the Canada Health Act.  In recent months provinces such as Quebec and Saskatchewan have ignored the prohibition against extra-billing and user charges by physicians or clinics - undermining the foundations of Medicare for all Canadians.